Labels
Posted by What Art Did He Make Today 9:34 AM 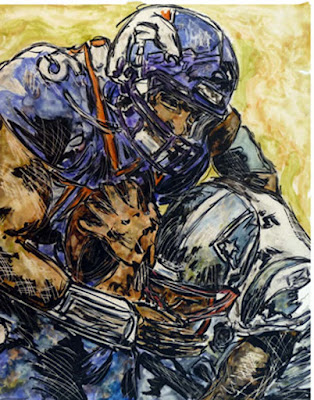 As it looks like Tim Tebow is going to get another try in the NFL with the Jacksonville Jaguars Football team I thought I would revisit a piece of football art I did of Tebow when he was playing with the Denver Broncos.

Although Tebow was playing quarterback then it looks like wants to put him in as a tight end.  That’s a tough position but Tebow is big enough to handle the position and the hits – but certainly not the experience. And, as some of the other football players in the league he is getting to be “an old dude.”

Seen here in the painting of Tebow he is taking a hit from a New England Patriot on one of his scrambling attempts.  I do wish him well in whatever he does, playing for the Jacksonville Jaguars or his growth into other areas of his life.  He seems, by all accounts, a really good person  who tries and has done a lot of special things in his life.