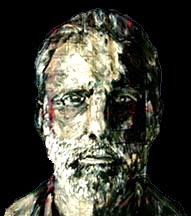 Are you interested in purchasing a painting from sports artist John Robertson?  Do you need a colorful and creative solution to a difficulty? Would you like to brainstorm? Any questions or thoughts? I may be of some assistance. You may take some time with your thoughts and email me using the email address:  JohnRobertsonSportsArt@gmail.com
Sports artist John Robertson's commercial sports projects include: NBA Golden State Warriors, Milwaukee Bucks, MLB Atlanta Braves and the NFL Green Bay Packers. He has created sports paintings for the NFL Minnesota Vikings, NFL San Francisco 49ers, the NBA New Jersey Nets, the NHL New Jersey Devils, and the NBA Orlando Magic.  His sports art has been used by Fox Sports and Fox Sports Net.

There is an intriguing article about the sports artist John Robertson from the Los Angeles Times written by the Pulitzer Prize winning columnist Al Martinez.  It was published in the Los Angeles Times, front page, Southern California Living Section E, Thursday, July 19, 2001.  Although the column was written s number of years ago it certainly captures the essence of John.

I have a dream tucked away in the shadows of my mind but I don't know exactly what it is yet. I'm hoping that one of these days the shadows will lift and the dream will emerge, like an glowing in the distance.  Meanwhile, it exists out there in the darkness, a land I've never visited in a world that doesn't exist.

I've been thinking about this for two reasons. One has to do with ( sports artist ) John Robertson, whom I'll get to in a minute, and the other with a play at the Ahmanson called "TheFlight of the Lawnchair Man".  It was in a trilogy of one-act plays about fate and goals and where life takes us. Sometimes whether we want to go there or not.

In 'Flight," a childlike man named Jerry had always wanted to learn to fly, but his ambition had been thwarted for one reason or another.  In middle age, knowing it is then or never, he attaches 400 helium-filled balloons to a lawn chair and drifts off into a fantasy-filled sky, feeling the sun, tasting the distance. When last seen, he was floating away in his dream.

It was a lovely little play that I thought about a lot, because I'm a dreamer too. Most of us are, I think, but we never get around to living our dreams, except for one or two of us who tie balloons to lawn chairs and take to the sky. Which brings me back to John Robertson.

Robertson is 57 and lives in a hilltop house trailer overlooking the ocean.  He's a slight man with a graying beard and the kind of enthusiastic attitude that glows in the dark; a guy doing exactly what he should be doing.  Robertson paints. Not with fancy oils and acrylics on textured canvas but with house paint on those rolls of canvas you put on the floor when you're redoing the ceiling. It was a question of economics at first. Drop cloths and cans of paint are a lot cheaper than the stuff you buy in art stores. Later it became a choice.

He began painting about a dozen years ago in all kinds of styles and sizes, but what he's become known for are the faces of musicians and writers he puts on 4 1/2-by 6-foot canvases in a techniques vaguely reminiscent of Jackson Pollock's. Faces glow through streaks and lines of color. Mine is one of them.

Robertson heard I was going to read and sign my novel "The Last City Room" at Village Books in the and asked if he could paint my face to hang in the window. He took a photograph first and painted from that. The somber, meditative visage of a journalist stares out. Me in a darker mood.

I met with Robertson later at his trailer house on a day as dramatic as any painting could ever be. The expanse of ocean below us was laced with a mist that shone like a bridal veil in the emerging sunlight. The blue above it was as pure as heaven.  Embraced by the ethereal view, Robertson revealed his dream.

He was working as an executive for a large chain furniture store when he became ill. He took six months off then worked part-time for a year and a half. No one has ever figured out what was wrong with him. ...(until later when he was diagnosed with Aerial Fibrillation)...  It caused emotional problems, he says, so he went to a psychiatrist who asked him what he'd liked to do as a child. Robertson said he'd always like coloring books. So the shrink said, "Then go color."

A lot of things happened after that. He was fired from his job, his marriage fell apart and he went to see a Van Gogh painting at the Getty. It's called "The Irises,“ and it took his breath away. "I used to wonder why anyone would spend $50 million for a painting," he said. "Then I saw, 'Irises' and broke into tears.  I stood there for two hours just staring at it. I've been trying to create the same emotional feeling ever since."

Offered another job, he agonized over whether to return to the straight world, the gray world, then took the advice of his minister who said, "Follow your heart.“ Robertson turned down the job offer and began living his dream.  He painted forests and fields of flowers at first, pursuing the surge of emotion Van Gogh had engendered, like the lawn-chair man searching for something beyond his range of vision. But it was mostly the faces on large canvases that Robertson liked doing, seeking the elusive nature of those whose features he describes in streams of color.

"Life is good," he said the other day. He meant it. Here was a guy who had walked away from a workaday world without looking back. Who discovered a talent he never knew he had, entwined with the dream he never knew he was dreaming. Here was a happy man.  He sells enough paintings to pay the rent and buy food. It takes him about three days to do a large portrait, and he'll sell you one for what you earn in your own three days of work. Musicians and writers get them for a little less than, say Bill Gates might pay.

"It's a bohemian life," Robertson says, "I only have time to paint. It's nothing great. I'm just putting paint on canvas. That's what it's all about. That's what I want."

I stopped along the ocean on the way home to think about that, where sky and sea merge in a wash of gradient blues. I stared toward the horizon for a long time, wondering about my own dream. And as I drove away, I couldn't help but envy the lawn-chair man, colored balloons radiant in the sunlight, soaring off toward the far distance.