Labels
Posted by What Art Did He Make Today 11:06 AM

Why would I be posting one of my bulldog art on a sports art blog post?  Well, the bulldog is the mascot of and their Basketball team is in the finals of the NCAA “March Madness” basketball tournament. 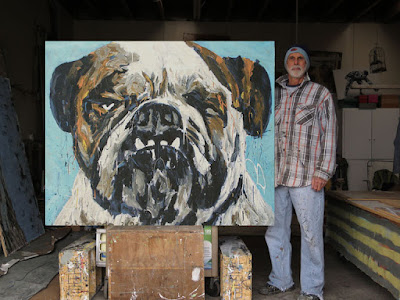 Gonzaga was the one that almost got bitten by the UCLA Bruins in the final four, semifinals on Saturday.  Gonzaga was only two wins away from having an undefeated year.  The Bruins gnawed on the bulldog's attempt to preserve their perfect season.  During their 93 -90 win over the Bruins the score continually changed back and forth by just a couple of points and over a dozen times they were tied.  Even as the game ended they were tied and had to go into overtime play.

No. 11 UCLA narrowly missed the winning shot with a foul called in overtime.  Tied, with three seconds to go, and the whole basketball court to traverse they Bulldog’s threw in a pass and then Jalen Suggs threw up a “Hail Mary '' shot just a few steps in from mid-court.  The shot beat the buzzer in the overtime avoiding the possibility of one of the biggest  upsets in tournament history. The Gonzaga Bulldogs maintained their undefeated season and a chance for the perfect season.