Labels
Posted by What Art Did He Make Today 1:21 AM

When you read this and see my painting of the basketball player holding the ball, March Madness may have already passed.  Is there or was there a  fairy tale story in this March Madness?  Who goes down the crazy rabbit hole with the March Hare, runs with the mad hatter and comes out winning in wonderland. 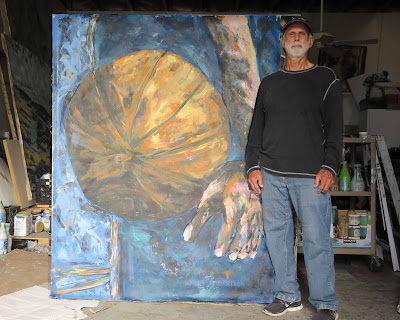 The covid pandemic may have come and gone the way of other viruses or college teams.  A great college team comes along, stays together and sweeps everything.  And then goes into the doldrums.

A team we have not heard from much in these last few years is UCLA.   Of course my all time favorite team (because I am from LA) is the Bruins under the great coaching leadership of John Wooden.  And, of course their run through the NCAA’s March Madness is legendary.  From 1963-75 the UCLA Bruins had an overall record of 335-22 (93.8 winning percentage); 10 national championships and four undefeated seasons. That’s as good as it gets.  How good were they? They had an 88-game winning streak, but what a lot of people don’t know is that the Bruins went 205-5 (97.6 percent) during one seven year run.

On a personal level putting those numbers into perspective is daunting.  I’m an artist and I paint a lot.  I used to say, “A painting a day keeps the creditors away.”  Comparing those percentage points, let’s say that I paint 200 paintings - then only 5 of them would be bad.  If I was a baseball player I’d be batting .970.  That is outrageous.  When I am on a streak, as a painter I can paint three good ones out of ten.  I would be three for ten - batting .300.  That’s if I am really lucky.  Like a lot college basketball teams I just go along and have some good seasons and some great seasons.  Occasionally, not so good.

The March Madness tournament is always like entering “Through the Looking Glass” because you never know what you are going to see.  Are the players going to play as if they trained with a skillful coach or are they going to act as if trained by a Hookah-Smoking Caterpillar?  That is what makes watching a college basketball tournament so exciting. They beat the pros for enthusiasm every time.

A highly ranked team pulls a “humpty-dumpty” and gets knocked off.  With every turn on the scoreboard the college basketball world gets stunned when a favorite loses and we watch the merriment of the underdog.  There is nothing more exciting than a true buzzer-beater.  That’s what great about watching the NCAA March Madness tournament – anything can happen an this year is no different than any other in that respect.