Labels
Posted by What Art Did He Make Today 12:02 AM 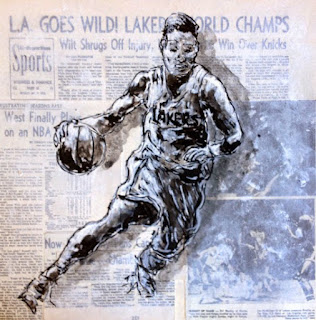 He was a mythic player rising above talents that played with him so you went to the basketball games to see him play.

Baylor’s hang time on a jump shot was like watching a guy shoot from a balloon.  And the basketball’s flight was so smooth it floated to the hoop.  His running bank shot was another classic launching other balloons that would float over bigger defenders.  Because of his height (6 feet 5 inches) he was considered an undersized rebounder.  Undersized?  That is like saying Magic Johnson is undersized, maybe standing next to "Shaq" O'Neal. As a “small forward” Baylor averaged 13.5 rebounds per game during his career, including 19.8 rebounds per game.   during the 1960–61 season — a season average exceeded by only five other players in NBA history, all of whom were 6 ft 8 in or taller.  (Thank you Wikipedia)  Those are “giant” numbers.

As a boy the NBA was still just starting to get attention to the general sports fan.  My dad took me to a lot of baseball games (Minor league as the Dodgers had not arrived in LA yet) and football. The Rams was the major sporting event to watch.  It wasn’t until the 1960-61 season that the Lakers  showed up in LA   When Baylor set a new NBA scoring record when he scored 71 points in the 1960–61season it was time for my dad and me to start paying attention to the NBA.