Labels
Posted by What Art Did He Make Today 12:02 AM

I’m breaking away from my sports art today to celebrate with a St Patrick’s Day Fairy fantasy wonderland painting.  I am not Irish but do have a few friends that are, and we generally have a get-together.

When I asked one of my good friends if he was celebrating St Patrick’s Day with his normal house party he looked down and just took off his hat and placed it across his heart.  The fantasy fairies of will be missing from his household. No “Danny Boy”:  Irish eyes will not be shining. 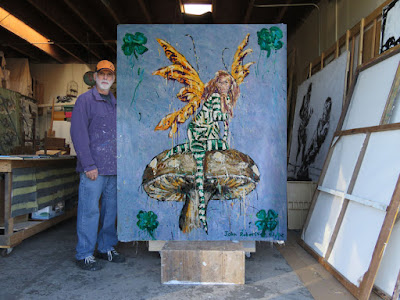 But he did say he will have Guinness in a jar.  And he did invite me over for one.  But that was a false invitation as he knows I don’t drink beer unless it is a root beer float,

I will just have to close my eyes and picture the Irish dancing, the drumming, the singing and the camaraderie that we usually have on this celebratory day.  I am going to miss the chat with acquaintances that I see only once a year.  I am only just now, after about 20 years of going to this event, able to identify who is a couple and who isn’t.  I don’t know what political party they belong to or which church they attend (unless they are Irish)  I am going to miss attending an event in where no one is posing.  I am going to miss the guy who has had six beers and then tries to explain block chain, Bitcoin and crypto- currency - although I would like a good explanation of  NFT exchanges.

The Irish fairy painting does give me a good feeling.  I painted it a number of years ago and it was a struggle trying to get the model up on top of the mushroom.  And once up there I kept telling her to stop eating the prop. I think she thought she was the caterpillar from “ in Wonderland” but I explained “” was not a fairytale.   We settled in and I was able to do the painting.  It is 50” by 70” acrylic on unstretched canvas and is buried in my storage.