Labels
Posted by What Art Did He Make Today 10:31 AM 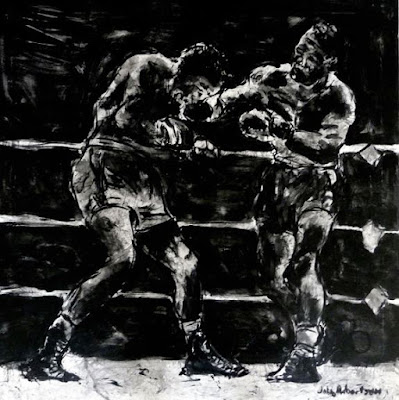 I was sorry to hear of the passing of the great boxing legend Marvelous Marvin Hagler.  He was one of my favorite boxers of all time - although this is not a painting of him in the ring. But his death reminded me of my enjoyment of watching boxing on tv as a kid with my dad.  That continued through the 80’s when I watched Hagler’s major fights that were shown on tv.  They were classic all out brawls - my favorite being his battles with Thomas “Hitman” Hearns.

his interest in boxing continued to a point where I did a series of boxing paintings and drawing and had a show with a number of the works.  The painting shown here was one of those paintings and one I had decided to keep around for a while.

The boxing painting is in storage but, as I remember, it is 36” x 36” acrylic on stretched canvas.