Labels
Posted by What Art Did He Make Today 7:28 AM 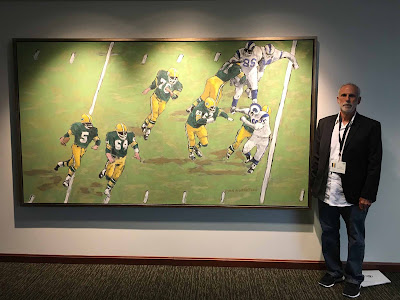 
The Green Bay Packers re-modeled Lambeau Field, the football stadium where they play.  It is a classic football stadium in which they wanted to keep the tradition of alive by not tearing it down and building a new one.  They sought out football art and through their art consultant found and purchased eight pieces of my work.  The football paintings are in different locations in the stadium.  This is a photograph of me standing in front of the running back painting, and, as I recall, it is in a section where the elevators open up to one of the levels and – there it is.


About the Football Painting

and the art consultant were very easy to work with.  They allowed me to do whatever I liked – and only with minor modifications accepted a number of the pieces of art.  Their most concern was the accuracy of the positions the players were in and the actual numbers on the jersey.  They had to be in keeping with the time these players played.  In this case number 5, is the running back, Paul Hornung, with the lead blocker being the great offensive lineman, Jerry Kramer.  They are playing against the LA Rams.   If you want more information about the painting and it’s placement there is an earlier link on this blog at http://www.johnrobertsonsportsart.com/2017/08/green-bay-packers-painting-for-lambeau.html that will tell you more.