Labels
Posted by What Art Did He Make Today 6:00 PM 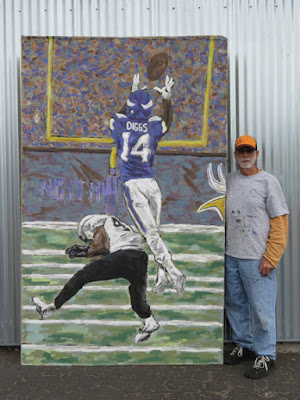 Football season is getting close so I thought you would like to see, probably, one of my favorite plays of all time was the Minnesota Miracle pass from the Minnesota Vikings quarterback Case Keenum to wide receiver Stefon Diggs last season that saved the Minnesota Vikings season and crushed the New Orleans Saints and moved the Vikings into the NFC Championship Game.

As some of you know I am a sports artist who has created artwork for a number of sports stadiums and arenas, including the Minnesota Vikings US Bank stadium.  Sometimes a sports play comes along that needs to be painted just for the joy of recreating a scene or action.  So here is my interpretation of the great "Seven Heaven" football catch.

The football play, "seven heaven" is a deep corner route and if the quarterback, in this case, Case Keenum hits the wide receiver, in this case it’s Stefon Diggs, then something heavenly happens.   And in this particular case, one of the greatest plays of all time.  The football play, if you would llike to watch it again, is  here:  link to a video of the play.
Here’s a quick rundown of how the play went down.  There was 10 seconds showing on the clock and it was 3rd and 10 .  The Vikings were at their own 39 yard line.  Stefon Diggs runs the seven heaven route, catches the pass, the cornerback misses the tackle (I’m not giving his name as he has had enough hassle about his missed play) and Diggs scores.  It was the first  fourth-quarter, walk-off touchdown in NFL playoff history.  As an aside here is an interesting comment about the walk-off touchdown.