Labels
Posted by What Art Did He Make Today 1:00 PM

Magic Johnson was the  “quarterback” on the Lakers basketball court -  the point guard - and the most important player on the team - and what most consider the best point guard ever,Some people have referred to Magic Johnson as the indisputable "Point God."   He was an absolutely great, all 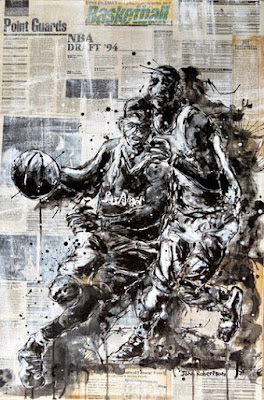 around player who probably sacrificed individual statistics for the greater good of the team - and in doing so, brought other teammates up to play at a higher level.  And, of course, won more games.  He is the one who led the team by trying to make the good decisions for the plays.  He generally handled the ball more than any other player on the court and passed the ball off to other players to lead them towards a goal. To have a great team is to have a leader who will work to have all contribute to it's success.  And without that great leadership in the "point guard" position few teams have had a high level of successful seasons.
Why Play Sports

All of this leads me to the good reason of why it is important for people to play sports.  I did as a child and as an adult participated in sports into my sixties and still exercise regularly.  One of the things sports taught me was developing teamwork.  This is a way to learn how to help others, and thereby themselves, to work together towards a specific goal, (winning).  We see this problem of teamwork all the time in the major professional sports.  I think the best example of that is in the NBA where there are "star" players and "winning" teams.  I won’t point out the great players who played on losing teams but one of the downfalls of those teams was the fact that it really wasn’t a “team” but a bunch of individual players just “doing their thing.”   Most sports are a team effort.  And the same goes for life.  We are all in it together and participating in life as a joint venture with others makes for a more successful and fulfilling life.