I image almost every baseball fan is familiar with the name Joe DiMaggio.  He is considered one of the greatest baseball players of all time playing for at the time one of the greatest baseball teams, the New York Yankees.  There is nothing much I can add to all of his stats.  I have also painted DiMaggio a number of times but thought it would be fun to try and do a simple, small drawing of him.  This ink drawing of Joe DiMaggio by sports artist John Robertson  is 11 inches by 14 inches on 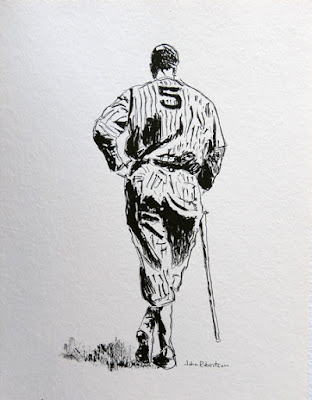 It seems the only way one generation (who have not followed baseball) of people know Joe DiMaggio is that he was a spokesman for the brand Mr. Coffee.  The older baseball crowd knows him by his nickname “Joltin’ Joe” or “The Yankee Clipper.” He was called by his many fans “Joltin’ Joe“because he was such a strong, hard hitter.  And others called him “The Yankee Clipper” because he sailed so gracefully through the outfield when making a catch in the wide center field of Yankee stadium.   And one of the big reasons people knew him was that he was one time married to Marilyn Monroe.  He was immortalized in the Paul Simon song, ‘Mrs. Robinson” with the line, “Where have you gone, Joe DiMaggio /  Our nation turns its lonely eyes to you” -  meaning where has our heroes gone, where has the innocence of our youth gone and where are the days of the past as times have changes dramatically (this song was written in the sixties) and they are not coming back.  That’s a bit sobering.

Joe DiMaggio retired from baseball just as I was getting interested in the game.  1951.  I was young and listened to the Yankees games on the radio – the LA Dodgers were still in and did not come to L A for another six years.  So I was a Yankees fan and saw DiMaggio as a hero.  Heroes diminish and I lost some of my interest in baseball until the Dodgers showed up in LA.

He was always being quoted and there are plenty around to draw from but I think the most interesting one must have been from when DiMaggio spoke about his days of his own innocence when he first started playing baseball.  He said, "I can remember a reporter asking me for a quote, and I didn't know what a quote was. I thought it was some kind of soft drink."