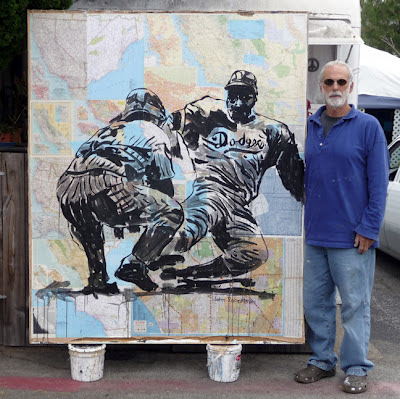 Well, I guess us LA Dodgers fans can give a sigh or relief as they did finally win a game that puts them into the playoffs.  I know, I know, at this point in writing and showing the Dodgers art they are in a wild card position - and that is better than nothing.  And considering the Dodgers, at one recent point was considered one of the best teams in baseball, there is some satisfaction in knowing there are a lot of teams, 20 of them, would be thrilled get this far.  Let us hope they start playing to their ability.

The Los Angeles Dodgers expect to win their fifth consecutive division championship and a birth in the World Series.  Good luck.  The way they have been playing for more than the last three weeks it will be a challenge for them to get back on track.  They are in the post-season play and in a few days, hopefully in the next few, they win the National League West championship.  And if they can achieve the best record in baseball this year, (that is still a question) they will have the home field advantage if they make it to the World Series.

About the LA Dodgers painting

In the meantime here is a piece of art celebrating the Los Angeles Dodgers – a player sliding into home plate with a Yankee catcher tagging him out.  Like the Dodgers the Yankees hold a wild-card position with the Indians up a couple of games.  The LA Dodgers painting by sports artist John Robertson is ink and acrylic on a variety of maps of .  The painting is 5 feet by 6 feet.