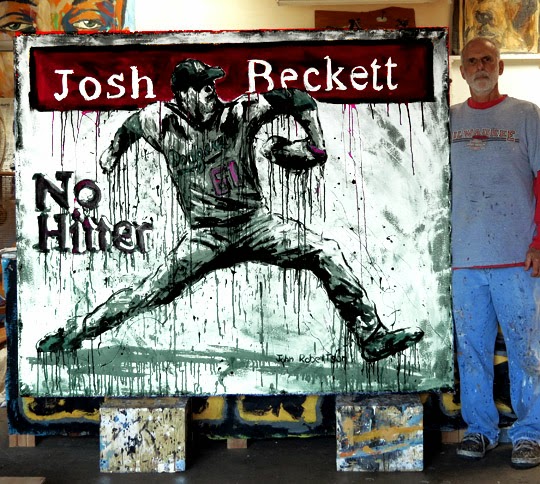 Wouldn’t it be nice is the LA Dodgers had someone who was part of the team during the play-offs to bring home the League Championship?  Here it is, time for the LA Dodgers post-season play-off, a run toward the World Series and there is no pitcher like Josh Beckett, who, at 23 received the award as the 2003 World Series MVP while with the Marlins, and with the Red Sox for the win in the 2007 World Series.    -   At 34 in he pitched a no hitter against the Philadelphia Phillies for the Los Angeles Dodgers on May 25, 2014 becoming the 19th man to do so in Dodgers history. However, his year and career ended due to an injury and he announced his retirement on October 7, 2014.  But For Beckett there was never  another time for a World Series appearence.  In a different context but similar circumstances Josh said this about change, "As much as I'm looking forward to the next chapter, I enjoyed the last one. Even during the tough times I met so many people who were just awesome. They were real fans."

A Little More About Josh Beckett

With Beckett it would have been such an easier task but the variety of injuries and the time spent in rehabilitation did not make for a nice ending to the season that year.  And he went in for surgery again next year with the big life time out on the horizon.

There is always that observation that baseball-is-a-metaphor-for-life.  A young baseball player goes out and plays through his youth and when he gets old enough he tries to make a living at it.  He makes a team.  He has good days and bad days.  He goes home and his wife and children are happy to see him.    When he plays he is part of a team of workers but he has his individual job to do, pitch, strike, hit, catch, etc.  - all of which he does on his own.  There is nobody to help him on those things.  Either he has learned his skills or not.  Yes, his co-workers help him out on some of his skills, but the bottom line is - he is on his own.  Josh Beckett says to others, "... I just tell them, 'You have to deal with some of this and some of that, but you're going to get this and get that.''

I always liked what Beckett had to say about his pitching and which could apply to almost anything anyone does.  He said, “I think I've always been prepared for this. I know what I have to do. You can't make rocket science out of it. You just have to execute pitches. Don't let exterior distractions in. It just takes away from what you're trying to do.”