Yes, another sports art drawing of the great New York Yankees Joe DiMaggio.  Although, as a kid I was more of a fan of the Brooklyn Dodgers, I did like to follow Joe DiMaggio and listen to the games out of on the radio.  As I have said in other posts DiMaggio was such an inspiration to so 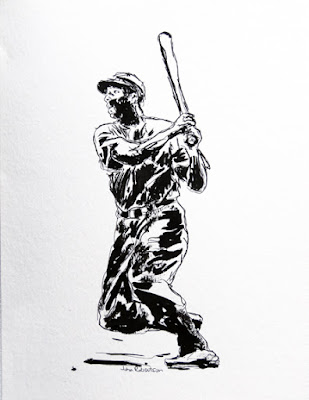 many boys and playing baseball.   This image  is an ink drawing by me, sports artist John Robertson, is 11’ x 14” ink on watercolor paper.

DiMaggio played in his first game with the N.Y. Yankees in on May 4, 1936.  That was 81 years ago signing out of for $75,000.  That was a lot of money then – and to me- still a lot of money.  Yeh, he got a lot of cheers when he came to bat and even more when his first time at bat he gets a single.  It wasn’t the best of hits as the grounder to the pitcher was an easy play.  But there was a player on third so the pitcher threw to home to protect the run.  And Joe was safe at first.  That was a good way to start off his first day.

The inning got better for Joe when Lou Gehrig walked and moved DiMaggio to second. Another great Yankee Gehrig was the New York Yankees first baseman and  played 17 years with a batting average of 340.  So, now DiMaggio is on second and Gehrig is on first and the player on third had scored earlier through a miss thrown ball.  Ben Chapman, an outfielder (and later involved in a nasty event in baseball history) comes up to the plate and hits a double, driving Joe to home.  DiMaggio not only gets a hit in his first time at bat for the Yankees but manages to score.

How Joe DiMaggio finished the game.

Joe DiMaggio comes up in the second inning and does it again – this time getting a dropping a hit into the short outfield for a single and later getting driven in for another run.  Joe hit a triple in the 6th inning.  He goes three for six in his first appearance and has a really good start to his pro career.