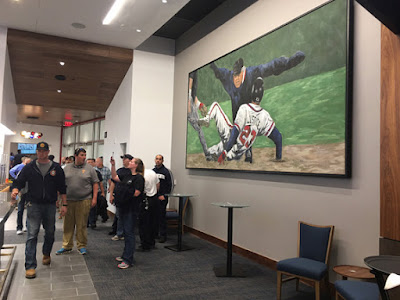 I created three pieces this size and will see other post of the other paintings on this blog.  Although I have created sports art for a number of other stadiums the three MLB baseball pieces I painted of Atlanta Braves players are the largest.   The other two pieces are of Chipper Jones and the other is of Dale Murphy.  All three of the pieces are on display in the Delta Sky Club area of the  stadium.

Justice was a three-time MLB All-Star who played right field and hit over 300 home runs in his 14-year career.  He was also on a winning World Series with the Atlanta Braves in 1995.  And here is a little bit of Trivia.  He was married to actress  from 1992 to 1996.  By the way , if you are interested in following David Justice here is his twitter @23davidjustice

I am always curious about some of the things athletes say.  Here is an odd one attributed to David Justice.  “I mulled over what he had told me as I savored the Scotch. Not bad, really — like a beer that’s been in a brawl.”   The real question about this quote is who was David Justice drinking Scotch with that  made that statement to him.  I have no idea.

The painting of David Justice by sports artist John Robertson is 8 feet by 15 feet, acrylic on canvas.