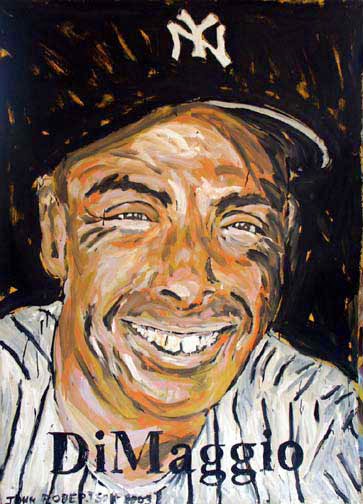 As a boy and like so many others I thought Joe DiMaggio was the baseball player to follow and worship.  We did not have a major league team in at the time so the Yankees were the team we followed.  (What? No TV?  Nope.  Not then. This was 1948-1951) Joe was nicknamed "Joltin' Joe" and "The Yankee Clipper" and was what we all wanted to grow up to be - American Major League Baseball center fielder for the Yankees.  Dreams.  Boyhood dreams.

Even adults thought that Joe DiMaggio was something special.  Kevin Costner, who made that great baseball movie, “Field of Dreams” said about Joe DiMaggio, “There are certain people’s names that are reminders of what men can be like. To this day, when I hear the name Joe DiMaggio, it is so much more than a man’s name. It reminds me to play whatever game I’m in with more grace and pride and dignity…He is a man who speaks to us about how to walk through life and how to receive the admiration only the famous can know…and about how to wear defeat and disappointment as if it were just a passing storm. Men like Joe DiMaggio are not just of their own time. They are men for the ages.”

I remember in 1952 collecting Topps Baseball Cards – buying packs and packs of gum to get that Topps, Joe DiMaggio 1952 card. So I gathered about one-hundred-and-seventy-five cards before discovering that he retired before the production of the 1952 cards were printed. (I still have the 1952 Topps cards I collected as a boy.  And no they are not in good condition.  Who knew then.  I glued the cards into a paper scrapbook so on the back of the cards there are these great hunks of Elmer’s Rubber Cement and bits of paper attached to the cards.)


For me this is where Joe DiMaggio went

I continued to follow the Yankees until the Brooklyn Dodgers moved to for the 1958 season and my allegiance changed.  But, to me, baseball was never the same with DiMaggio gone from the game.  I really didn’t have much thought about DiMaggio being gone or what it might have meant to me until 1967.  The was the year one of my favorite movies came out, “The Graduate”  a coming of age movie about a college graduate entwined in the process of adulthood, the loss of innocence, manhood, etc.  And in the movie soundtrack is one of the great Paul Simon and Art Garfunkel songs, “Mrs Robinson.”  The classic lines in the lyrics:

”Where have you gone, Joe DiMaggio?
A nation turns its lonely eyes to you, wo wo wo
What’s that you say, Mrs. Robinson
‘Joltin Joe’ has left and gone away, hey hey hey
Hey hey hey”

At that time I kicked and fought not to be an adult.  I had dropped out of high school - did my stint in the Navy,  tried college a number of times  and struggled to find direction.  Somehow the movie helped.  I was not alone but “Joltin Joe’ (had) left and gone away.”

Joe" DiMaggio November 25, 1914 – March 8, 1999) played his entire 13-year career for the New York Yankees. He is perhaps best known for his 56-game hitting streak (May 15 – July 16, 1941), a record that still stands.  DiMaggio was a three-time MVP winner and an All-Star in each of his 13 seasons. During his tenure with the Yankees, the club won ten American League pennants and nine World Series championships.  At the time of his retirement, he ranked fifth in career home runs (361) and sixth in career slugging percentage (.579). He was inducted into the Baseball Hall of Fame in 1955, and was voted the sport's greatest living player in a poll taken during the baseball centennial year of 1969.  ---- From Wikipedia, the free encyclopedia

This is what a couple of other great baseball players said of Joe DiMaggio:

(Joe) DiMaggio was the greatest all-around player I ever saw. His career cannot be summed up in numbers and awards. It might sound corny, but he had a profound and lasting impact on the country." - Ted Williams