Labels
Posted by What Art Did He Make Today 1:00 AM 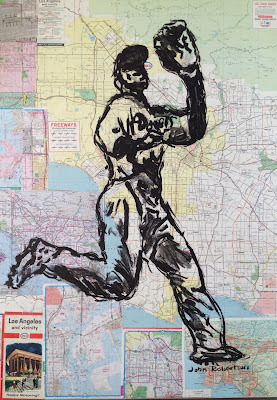 The baseball painting - LA Dodgers art of Andre Ethier playing right field is by sports artist John Robertson.  It is painted on a 30” by 40” gallery wrapped canvas with maps of applied to the surface.  The image is created with ink and acrylic paint.

As of this writing Andre Ethier of the Los Angeles Dodgers is hanging out at the location and hoping to start up from his disabled and is also expected to be in the Quakes lineup for what will be his first rehab game. He is not expected to be activated from the 60-day DL until Friday, Sept. 1. In the last couple of seasons Ethier has been out because of an injury suffered in Spring Training.  He has had a lot of problems from a herniated disk, with pain and discomfort in his lower back.

After Ethier had a leg injury in 2016, and sitting out almost all of the season with the LA Dodgerds he started off the 2017 season with this back problem.  What is interesting to know about his playing time with the Dodgers is that he has only been in sixteen games since 2015. Who knows how much work he will get once he is hopefully back after the beginning of September.
Labels: Andre Ethier Baseball Art Baseball Painting baseball player LA Dodgers Los Angeles Dodgers Art right fielder image Sports Artist John Robertson