Labels
Posted by What Art Did He Make Today 6:02 PM 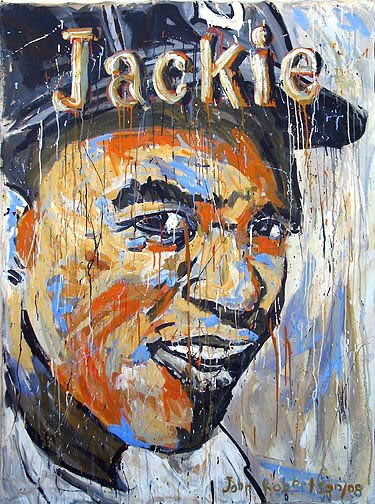 How good was Jackie Robinson as a major league player.  Well,  MLB has a special day every year when they celebrate his achievements – April 15 (of course that is tax day also but they chose that day because it was April 15, 1947 when he played his first game in the majors at Ebbets Field in Brooklyn, New York. And why do  they celebrate him?  Because he was the first African American Major League Baseball (MLB) player of the modern era.  He broke down the racial segregation barrier which had, in the past, relegated African-Americans to the Negro leagues for six decades.

He won Rookie of the Year in 1947 with a batting average of .297, 175 hits, 12 home runs, and 48 runs batted in.  In ten seasons he played in six World Series and contributed to the Dodgers' 1955 World Championship. He was selected for six consecutive All-Star Games from 1949 to 1954, was the recipient of the inaugural MLB Rookie of the Year Award in 1947, and won the National League Most Valuable Player Award in 1949 – the first black player so honored. Robinson was inducted into the Baseball Hall of Fame in 1962 and he was the first African American inducted at the Cooperstown Hall of Fame and Museum In 1997, Major League Baseball retired his uniform number, 42, across all major league teams.