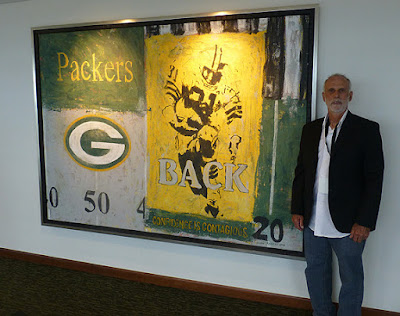 I have had the privilege to paint art for another NFL football stadium, Lambeau Field, the stadium for the Green Bay Packers, one of the oldest franchises in the NFL. Eight of my paintings in their permanent art collection adorn different sections of the suites and club levels of Lambeau Field in.  I have also have works or art in the permanent collection of the NFL’s Levi Stadium, home of the San Francisco Forty Niners and the US Bank stadium, home of the Minnesota Vikings, among other arena’s and ballparks.  (see bio.)

About the Packers Art

I feel it is a great honor to be able to create work that celebrates the culture and history of Lambeau Field, one of the great stadiums to watch a football game in.  Using canvas, acrylic and other materials such as maps and old newsprint with the images I painted specific players along with a series of old football posters.   I was given great freedom to paint what I wanted.  As my favorite era of the Green Bay Packers was the sixties I created half of the paintings from that period.

Why I am a fan of Green Bay Packers

The reason I am such a fan of the Packers is that during the sixties I had a good friend whose family was from .  We spent a couple of weeks in , and went to their practice field every day.  What was so great about those days was that one could sit on the practice field, on the bench, with the players and actually talk with them.  Can you imagine sitting next to your football idols?  My favorite of all times was Ray Nitschke the absolutely best linebacker off all time. Yup. Sat next to him and talked.  Fuzzy Thurston, the great lineman, Jim Taylor, Paul W. Horning, (the golden boy) Jerry Kramer, etc.

The sports art by sports artist John Robertson is of JimTaylor, running back is six feet by eight feet, acrylic on canvas.