Baseball Catch Down Third Base Line 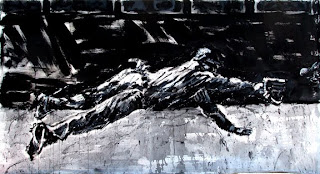 "Baseball Catch Down Third Base Line"

Catching a throw-out from a fielder is easy – but a baseball catch on a line drive down the third base line is hard. But it looks easy from the stands - and artistic with the baseball player’s body laid nearly parallel with the ground and across the infield. Most batters think that when they hit a line drive it is good for a base and sometimes two.  But a good third baseman will break the batter’s heart with a great catch.

A couple of interesting baseball rules about catching a ball.

Here is an interesting rule in baseball which has to do with catching a baseball.  Players can only catch the ball with their hand, or their mitt. You can’t use your hat or your shirt or anything that’s not your bare hand or the mitt. If the ball is caught, or even touched intentionally, by a player with anything other than their bare hand or glove, on their hand, all runners, including the batter, get to advance a base.   Now I did see once a play where the infielder was catching a high fly ball behind a base but in play.  The ball his glove and bounced out but he caught it between his forearm and bicep.  It was ruled a hit and the batter took first base.

Tied into the above rule is one of my favorites, An infield fly is when a ball stays in the infield that isn't a bunt or line drive.  When there are runners on first and second or first, second, and third and less than two outs the umpire can make the judgment that an infielder, catcher, or pitcher could catch it with ordinary effort (whatever that means) the batter is out, even if no one caught it, even if they did catch it and then dropped it. The ball is still in play so any base runners who began to advance can still continue and the normal rules apply to them.  Confusing but fair because if they let it drop there is a good possibility for a double play on the players who hold their base with anticipation of the ball being caught.  If it is dropped then they are stuck on the base and when advancing can be easily thrown out.   This is where the expression “Hung out to dry” is sometimes used when the player is hung out on the base line waiting for the bsll to be either csught or dropped.  As an aside the expression comes is  based on the practice of hanging an animal that has been killed in a tree so its meat can dry.  Nice metaphor for a base runner.
Labels: Baseball Catch baseball player line drive line drive catch Major League Baseball MLB Sports Art Sports Artist John Robertson sports paintings Third baseman