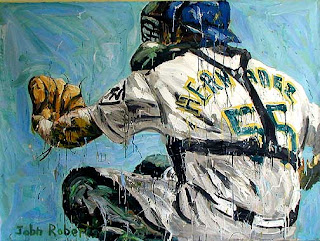 A Catcher is a Backstop With a Good Arm

Here’s a funny story about Joe Torre who, among a number of great achievements was a great catcher.  He was once asked why he became a catcher.  “When I was 16 years old, my brother Frank said, 'You'd better become a catcher, because you're too big and fat to do anything else.' Well, I took his advice. It was a quick way to get to the big leagues, and I've never regretted it.”  Now Hernandez never made the choice because he was six feet tall and weighed in at around one ninety.  That’s not big and fat.  Also he was a good hitter with a two-sixty-three hitting average over his long career.

Ramon Hernandez, like most catchers was the defensive leader on the field. He called the pitches and positioned players on the field and had a pragmatic view of baseball. The great pitcher Bob Feller said, "If you believe your catcher is intelligent and you know that he has considerable experience, it is a good thing to leave the game almost entirely in his hands."

Ramon had psychological insights and had a list of behaviors for each player approaching the batting box. His eyes were continuing to move across the field of play and his mind running the different offensive scenarios in his head. All of this going on with a baseball bat menacingly inches from his head.  That is what good catchers did.
Labels: Baseball Baseball Art Baseball catcher Baseball Painting catcher Cincinnati Reds first base First Baseman MLB Ramon Hernandez Sports Art Sports Artist John Robertson sports paintings