Labels
Posted by Unknown 9:54 AM

The painting you see above is Atlanta Braves art from their new SunTrust baseball stadium in   The painting of Dale Murphy is 8 feet by 15 feet, acrylic on unstretched canvas.  I created three pieces this size and will see other post of the other paintings on this blog.  Although I have created sports 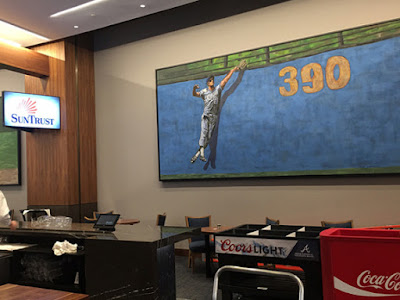 art for a number of other stadiums the three MLB baseball pieces I painted of Atlanta Braves players are the largest.   The other two pieces are of Chipper Jones and the other is of David Justice.  All three of the pieces are on display in the Delta Sky Club area of the stadium.

For all of the Atlanta Braves fans I am sure you know a lot about Dale Murphy as he is one of their best players ever.  For a complete history of him the best thing to do is to visit his own Dale Murphy web site that has more facts than you will ever want to know.

For those of you that just want a  little information here is a few basics (from his website)  Dale Murphy was chosen by the Atlanta Braves in the first round of the 1974 Major League Draft. Over the next few years, he worked his way through the Braves minor league system and made his major league debut in 1976.

Although he began his career as a catcher, he spent a short time at first base and finally ended up in the outfield where he became the youngest player in history to win back-to-back MVP awards (1982 and 1983), was named to the National League All-Star team seven times, earned four Silver Slugger awards and five Gold Gloves.

What always interests me is what either the actual player has said or what others have said about him.  In the case of Dale Murphy he Sid something very basic about being an athlete and nothing particularly profound but true: “I miss baseball.”   Most people can relate to that after they retire.  His wife certainly has as it has been reported that after he retired he became her full-time job.  Yes, she “missed” baseball too.  And one of my favorite quotes is when Dale Murphy said, “Whether I am hitting .100 or .300 I am resolved to, at least, enjoy every game.”  That has meaning far beyond baseball. Try to find out what you like to do, then do it even if you have no real success at it. No matter how it may be measured, we need to enjoy what we do
Labels: art suntrust park Atlanta Braves Atlanta Braves Art Baseball baseball stadium Dale Murphy Dale Murphy painting MLB SunTrust Park suntrust park atlanta SunTrust Stadium