The defenseman Drew Doughty of the NHL Los Angeles Kings art showing the hockey player battling for the hockey puck on the ice - this illustrated painting of NHL Drew Doughty Doughty is 5 feet by 6 feet, acrylic on unstretched canvas. 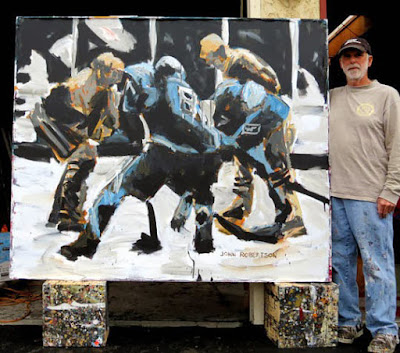 Drew Doughty is a defenseman who currently plays for and is an alternate captain for the Los Angeles Kings in the National Hockey League (NHL). He was selected second overall by the Kings in the 2008 NHL. Doughty made his NHL debut in 2008 as an 18-year-old and was named to the All-Rookie Team. He is a two-time Stanley Cup champion with the Kings from the 2011–12 NHL season and the 2013–14 NHL season, two-time Olympic gold medalist with the Canadian national team at Vancouver 2010 and Sochi 2014, 2009 World Championship silver medalist, 2008 World Junior Championship gold medalist, and a Norris Trophy finalist from the 2009–10 and 2014–15 NHL season winning the trophy in 2016.  (Thank you Wikipedia, for that information)

Here is a straight forward quote about playing hockey in this generation of the game.  Although hockey is a team sport it used to have big individual stars that relied on their own handling of the puck and scoring.  Here’s what Drew says about the game now,   “What you can expect to do is go to the net hard.  The goalies are so good these days if you’re not getting screens in front, if you're not getting rebounds or tips, goals aren't going to go in.”

Of course I like it when Doughty says something in a deadpan sort of way.  When asked about a particularity hard foul on another player Drew said,  "Generally, out West that's not a penalty."  Drew is sensitive about penalties s he is well known for spending back to back time in the penalty box.

Random Information I cam across about Drew Doughty