Labels
Posted by What Art Did He Make Today 9:13 AM

Dakar: Marc Coma The Most Dangerous Race on Earth

I did this motorcycle painting of the great Dakar Rally rider Marc Coma for a friend of mine.  The photo I worked from is from the 2110 Dakar Rally and is 30" x 36" acrylic on unsatretched canvas. 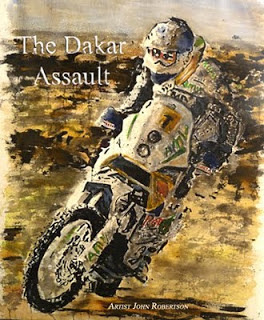 For those of you who don’t know, the is The Most Dangerous Race on Earth.  In Marc Coma’s  race in 2015  he drew on his experience for his fifth victory.  This was in the overall rankings. “I’m happy and proud,” Coma said at the finish in Barradero, 90 miles north of . “As usual, it was a grueling rally. We had to overcome a problem on the second day that slowed us down a bit in the rankings. From that point, we had to change strategy a little and push to recover that time. We knew the marathons would be key stages, and they were. This fifth win says a lot about all of us.”  Coma had achieved, 5 wins, and 6 world championships. Coma said on his Facebook page that he believed the time was right to retire. “I have to be honest with myself and with all the people who have been supported me along those years. To my sponsors and specially KTM, where I’ve always felt at home, thank you.”

Started by French motorcylist Thierry Sabine, the first rally of 182 vehicles left on Dec. 26, 1978 on a 6,000-mile journey to . The race has been in since security concerns forced the cancellation of the 2008 rally.  Cars, trucks, quads and motorbikes in the off-road endurance race scramble over rugged terrain in three South American countries.

The Dakar insanity is a one-of-a-kind, approximately 9,000-kilometer rally loop-de-looping through and it is not your average ramble in the country. For 30 years in Africa and now in it has been considered the toughest motor vehicle race in the world. As proving grounds for the manufacturers, approximately 45 percent do not finish the race – which only proves you can roll them and fold them and light them on fire. Vehicle parts fly and sometimes, so do the drivers.

How dangerous is the race? One year a rider got lost on the route and three days later they brought him out in a bag. Argentine quad driver Marco Patronelli said, "You could be dying at the side of the road and they would pass by at top speed." Although the vehicles do have rear-view mirrors the drivers/riders do not look back.  There is not much financial rewards for the event with the winner receiving a few thousand euros. I guess that is better than a trophy, and a kiss from a Buenos Aires beach bunny but it barely pays for the physical therapy a driver/rider needs after finishing the race.  The sport takes speed, endurance and keeping your bottom-side down. There is no bunching behind the leader, no caution flags, and no parade lap.