Labels
Posted by Unknown 9:30 AM

My niece  was watching a Minnesota Vikings verses the Dallas Cowboys Thursday night football game on NBC the other night.  After a after a commercial, one of the paintings I did for the Minnesota Vikings, US Bank Stadium "The Purple People Eaters" flashed on the screen.  I am not 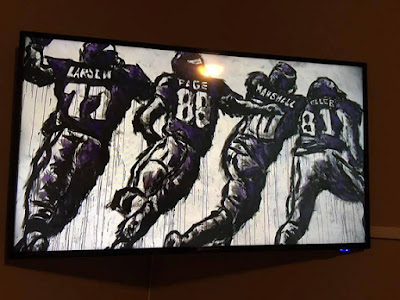 sure in what context they showed my painting. or what kind of reference they made about it.  She had a chance to photograph the television set with the painting featured on the screen and then posted the image on her Facebook account.

It is always a surprise to me when I am watching either a movie or television show and, all of a sudden, out of nowhere one of my paintings shows up on the screen.  Generally I am supposed to be informed and sign a release for the use the image with the purchase of a painting.  Then I am not informed.   I have had images pop up  a couple of times when something crops up completely out of context to the painting.

The oddest experience was when I was watching a horror - scary movie and in one of the opening scenes one of my paintings is in the background.  I am not sure which movie but it was from the movie series. Paranormal Phenomenon I think it was called Paranormal Activity 2. 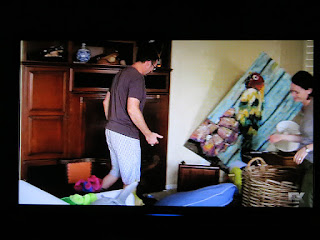 What is so odd about the painting is that it's of a guy who was walking past my studio with a parrot on his shoulder.  I asked if I could photograph him with the parrot and took a few shots One of the photos was of him holding the parrot on his hand.  I had sold the painting to an interior decorator/designer for a client. I totally forgot that I had done the painting then a couple of years later it appears in the movie.
Labels: Football Art Football Painting Minnesota Vikings Paranormal Activity 2 Purple People Eaters Sports Artist John Robertson Thursday night football US Bank Stadium