Labels
Posted by What Art Did He Make Today 8:29 AM

Vintage Chicago Cubs player wearing a uniform from the last time the Cubs played in the World Series. 4 ft by 8 ft. Acrylic on unstretched canvas. 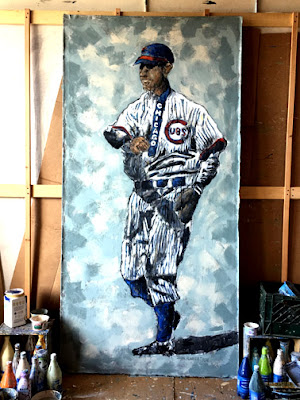 World Series Game 7: Will the Cubs or Indians break their curse?   1908. 1948. A drought will end If you're not watching baseball tonight .... something is wrong with you!! Just feels like this is going to be an epic ending.  Nobody has a good reason to not watch this game!!!  Things to remember: The pitcher throws the ball to the catcher. The catcher is the one without the bat.

I have not yet decided whether I will accept the result of tonight's game. I want to keep you in suspense.

.@DexterFowler launches the first leadoff homer in a winner-take-all

Tremendous sportsmanship being shown tonight. Really refreshing with all of the craziness going on in this world.

Not even a baseball fan, but @Cubs vs @Indians Game 7 is the stuff of HISTORY! Eyes glued to the TV!!!

@RaeBeta I don't believe politeness is an official statistic.

@RaeBeta Baseball is lots more fun the players are humanized as characters.

THIS is why baseball can be great!