Running Backs and Defensive Back

There is a handful of NFL Hall of Fame running backs and defensive backs who have worn number 24. The player in the painting wearing number 24 can be anybody.  He could be a running back or a cornerback or a free safety after intercepting a pass.  I wanted it to be an unidentified player and leave 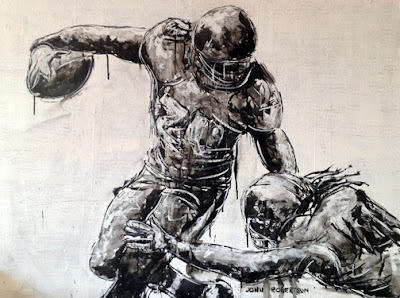 the interpretation up to the viewer.  This way you can project your own favorite player wearing the number.  Below I have described a few of the possibilities.

Lenny Moore is probably the best who wore number 24.  He played in from 1956 – 1967  He was inducted into the Hall of Fame Class of 1975.   Lenny was a 7  Time Pro Bowler and  5  Time First Team All – Pro.  There is a big difference in playing in the NFL now as opposed to playing in the 50's and 60's.   Lenny Moore was asked in a interview, "When you watch the Ravens and other National Football League teams play, is there something you like more about today’s football game than the game it was when you played?"  Lenny's answer. "I just enjoy it because of the nature of what it’s all about. It’s still the same to a degree with other modifications that they added in, different techniques, different calls, and how they monitor the game is a lot different. A lot guys wouldn’t have been able to play during our day that are playing today, with the things they do.  There was no whistle - you’d just be blasting people man, just be beating on people. Jumping, knocking them down. It wasn’t until you were just about dead man that the whistle blew, but that’s the way it was – punching, elbowing, slapping."

What I like about another player who wore number 24 is that he was overlooked in the draft - number 24, Willie Brown. Brown played college football at and when he left college in 1963 no professional team drafted him.  He did sign with the Houston Oilers of the old(AFL,  (American Football League) but was cut during training camp. He moved on to the AFL's Denver Broncos and then it all started for this non-drafted player.  Brown became a starter by the middle of his rookie season. In his second season Willie Brown won All-AFL and played in the AFL All-Star Game, recording nine interceptions for 144 yards.  In 1967, Brown was traded to the AFL's Oakland Raiders and spent the remainder of his playing career there. He served as defensive captain for 10 of his 12 years with the team. He was named to five AFL All Star games and four NFL Pro Bowls. He was also named All-AFL three times and All-NFL four times.

Another Willie - Willie Wood  had a similar experience that Willie Brown had.  Wood was not selected in the 1960 NFL draft, and contacted head coach Vince Lombardi to request a tryout.  Tthe Packers signed him as a rookie free agent in 1960. After a few days with the quarterbacks, he requested a switch to defense and was recast as a free safety, and was a starter in the season. He started until his retirement in 1971.  Willie Wood won All-NFL honors nine times in a nine-year stretch from 1962 through the 1971 season, participated in the Pro Bowl eight times, and played in six NFL championship games, winning all except the first in 1960.  Not bad for another non-drafted player.

The great Baltimore Ravens wide receiver Steve Smith, said ChampBailey was the best cornerback he had faced in his long career.  This is what Smith said about his comment. “But the reason that I really just say Champ is (best) because everybody wants to talk about the success of all these guys who are in their fourth or fifth years. I’m in my 15th year, and I’m 36. Some of these guys, when I was a rookie, were in elementary school. So I’m not going to crown a guy who’s been in the league six years and had three years of success and three years of failure or average. I want to see how he is in three or four more years when his speed goes, and he has to learn how to use his technique. That’s just me, but that’s where I feel like the legacy is built.’’
The 12 Pro Bowl selections are the most-ever by a cornerback, is tied for most ever (with Hall of Famer Ken Houston) for a defensive back and is tied for third all-time among all defensive players. Only Merlin Olsen, with 14 Pro Bowl selections, and Reggie White and Ray Lewis, with 13 each, had more on defense.

It's time to put a running back in with the cornerbacks.  Marshawn Lynch.  The Hall of Fame flanker and running back was All-NFL five times and the NFL Player of the Year in 1964. He starred for the Colts for 12 seasons (1956-67).  As some of you might know Marshawn was never a person who liked to give interviews or answer questions.   In one famous interview "I ain’t got nothing to say," the Seahawks running back told NFL Network's Michael Robinson, a former fullback, in a 2014 interview. "I just want to play football."   After a big win against the Arizona Cardinals Lynch was on camera with reporters in the hallway outside of 's locker room he responded to every question by simply stating, "Thanks for asking."   He had stomach problems during the game and when asked about it, he said, "I appreciate you asking about my stomach," Lynch said. "Thank you."