Labels
Posted by What Art Did He Make Today 2:00 AM

The start of this Los Angeles Rams season looks like will lead off with Case Keenum number 17 at quarterback.  Keenum, has made a career as backup but has worked hard to hold off the inevitable future of Jared Goff, the No. 1 pick in the NFL draft.  Keenum did a good job last year of taking 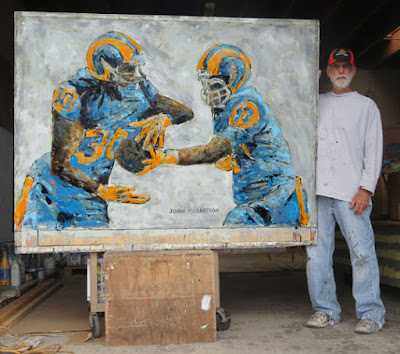 away Nick Foles job who was later released.

Back when I was a kid my dad used to take me to the LA Rams games in the Los Angeles Coliseum back in the late forties and early fifties.  At the time I remember there were two quarterbacks fighting for starting quarterback position; NormVan Brocklin who signed with the Rams out of the draft  and joined the Rams who already had a star quarterback, Bob Waterfield. So beginning in 1950, the Rams coach Joe Stydahar solved his problem by platooning Waterfield and Van Brocklin.  Later on, In a few more years they brought in Bill Wade.  So I was fortunate to see all of them play in .  Saw other great LA Rams players also - the great end Tom Fears and the fun running back, "Crazy Legs" Hirsh.

While I mentioned the fabulous nickname of "Crazy Legs"  I should also mention my favorite football nickname of all time.  Los Angeles Rams defensive back Dick "Night Train" Lane.   "Night Train" Lane had gotten the nickname after taking the night trains to away games because of his fear of flying.  Lane had the record for most interceptions in an NFL season (14), a record that has stood for over 60 years. He went from an undrafted football player, who worked in a factory but was good enough to be later inducted into the Pro Football Hall of Fame.

The other player in the LA Rams painting art is running back Todd Gurley. As the NFL football season starts  The Topps Company announced that Todd Gurley, is the cover athlete for the Topps 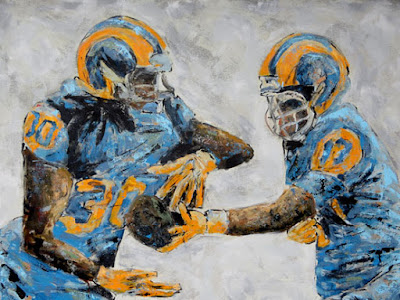 NFL HUDDLE® 2017 app.  And we all know why he was selected - because he is the reigning NFL Offensive Rookie of the Year.  That is why.

Gurley had an absolutely great first season and will try to live up to the great Los Angeles Rams running back Eric Dickerson who in his second season ran for over 2,000 yards.  That is almost a "Mission Impossible" but hopefully his offensive line will help him with the goal.

About the  Sports Art painting by sports artists John Robertson

The Case Keenum, Todd Gurley NFL football art painting is to honor these two players, one who has had a great beginning and another who has worked hard in his years to become a starting quarterback.  I hope they both have a great season.  The painting is  4 feet by 6 feet, acrylic on unstretched canvas.
Labels: Case Keenum Football Art Football paintings LA Rams Los Angeles Rams NFL Quarterback Running Back Sports Artists John Robertson Todd Gurley