As almost everyone knows Joe Montana, "The Comeback Kid" was one of the greatest football players ever to play the game. started his NFL career in 1979 with 49ers and played there 14 seasons.  I can't imagine being on top of my game for 14 years.  Up until 1979 I never lasted more than about six months at the same job.  It wasn't even until I was thirty four before I graduated college.   That means I am older than and he had a fabulous career long before I even began to settle down. 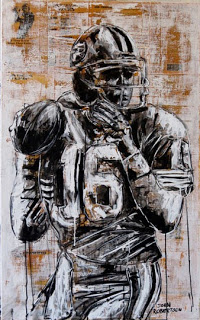 started and won four Super Bowls and was the first player ever to have been named Super Bowl Most Valuable Player three times. He also holds Super Bowl career records for most passes without an interception (122 in 4 games) and the all-time highest quarterback rating of 127.8. was elected to the Pro Football Hall of Fame in 2000, his first year of eligibility.  Let's see.  What had I accomplished.  Nothing.  Absolutely nothing.  I shouldn't say "nothing" because I did hold the record for the shortest time holding a job at a plastics manufacturing company.  I started at eight in the morning pulling small plastic gears out of drawers and then placing them in small envelopes and mailing them out to customers.  At nine thirty it was break time.  I asked my supervisor where the bathroom was.  Next to the bathroom door was the front door.  Out I went - the front door - and never went back.  I lasted one and a half hours.  Straight to the beach, I did, I did.  Never looked back.  Try to beat that record, .

Doctor Give Me the News

Would I want to be Joe Montana?  Not now, I wouldn't.  As says, " ... the physical stuff tries to catch up with you.’’  Tries to catch up??.  it does catch up.  The extensive physical problems he suffers is from more than two decades after he ended his NFL career in 1994.  has spent more time at the doctor's than he ever had on the field.   When standing in a swim suit he has more knife cuts on him than a butcher's side of beef.  When he walks, it's like watching a drunk sailor sway side to side.  And painful.   His knee can’t straighten despite a half-dozen surgeries.  And he thinks it is bad now.  Wait until he is my age and has to go to the bathroom four times a night.   He'll be dragging his leg across the bedroom floor.

And then there is the metal problems - potential mental problems. His path to thinking may be affected.   He’s had three neck fusions.  There’s nerve damage in one of his eyes.  “It acts like a lazy eye to some degree because every time you’re tired, it kind of goes wherever it feels like a little bit,’’ Montana said.  I have something like lazy eye only it's in my lazy brain and I kind of wander down to the beach and eat shrimp out of the tide pools.  A doctor said 's problem resulted from head trauma.  And said,  “Can’t figure out where that came from.’’  I guess he can't remember the hits.