Labels
Posted by What Art Did He Make Today 2:30 AM

I don't know much about this vintage football player that I painted from the past.  I ran across the image and thought it would be fun to paint.  I did some search on Google put could find out anything about him - so I thought I might make up a bit of his history. 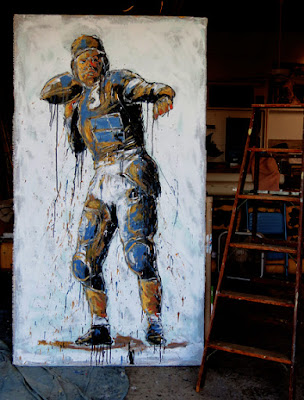 Alberte Mortensen was born in , in 1894 to immigrants from .  The family moved to shortly after he was born.  As a baby he had medical complications with his digestive track which led to difficulties in eating anything that was not white.  He only ate white bread, white noodles, white rice, drank milk and, of course liked ice cream (vanilla).  Because he was unhealthy and the family lived in poverty the Mortenen's asked for help from their Norse church which worshiped the old Norse gods of the Viking age - Thor, Odin and Frigg.  The Norse oracle, Völva or “priestess” recommended that they give up Alberte for foster care

The Mortensen family gave up the four-year-old Alberte to an Irish Catholic family, the Hughes.  The Hughes had immigrated to the from during the potato famine.  Once in his new home he adapted quite nicely to a diet of white potatoes.  His favorite dish was colcannon which became a staple at most of his meals.  It is a mash of potatoes, cabbage or kale and butter or cream, flavored with scallions.

Alberte grew heartily on the diet, eventually played on his high school football team, and because of his athletic ability was recruited to play with the a local football "club".  Even though he was only sixteen his skills as a quarterback made him locally famous.  He played for a  "pay for play" football 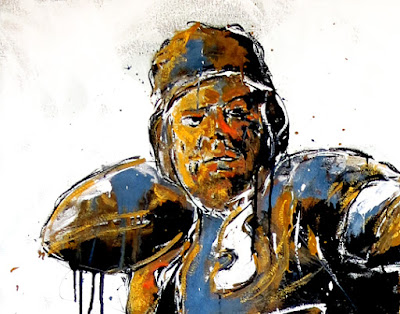 team which generated a small income for the Hughes family.  Because of his success his biological parents, the Mortensens wanted him back.

The Hughes gave a negative response.  As there is no actual word for "no" in Irish Gaelic, they actually said, "Ní hea," which literally means, "It is not."  The Hughes won in a short court battle and Alberte went on to play college football.  He disguised himself as an Indian  and went to where he played with Jim Thorpe, the great all-american.

Alberte, was now known as, Abukcheech, which means mouse.  Hid first season as quarterback at the Indian school he dedicated to his foster Irish mother, Chloe  Hughes.  When Alberte turned twenty-one he requested Irish citizenship to play soccer in .  At twenty-two he left for    Upon boarding the boat back to his adopted homeland he said, "I am Irish, I feel Irish, I will play forever in ."