As I live only a couple of blocks from the beach and my studio is even closer, it is only natural I would paint a surfer.  This surfer is standing on the rocks at Surfer's Point.  This surfing break is only a few hundred yards up the beach from the Ventura Pier and the "C" Street 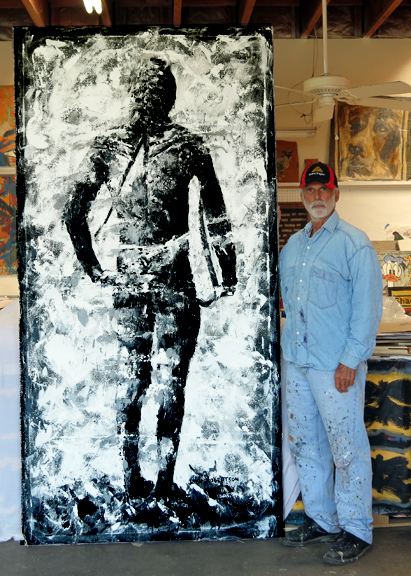 break.  "C" Street is more of an inside break as apposed to the "Point" break.

I first started surfing many, many years ago.  How Long?  Well I do not want to give away my age but when I started surfing there were some guys using redwood planks and wore knit swim suits.  Women still wore bonnets to the beach.  The boards were ten to twelve feet of solid redwood and weighed a hundred pounds.  To get one of those things off the beach was like dragging a dead seal back into the water.   It was like paddling a canoe with a chance of splinters.  I actually started out on the old balsa boards - no splinters and slippery when wet.  We used candle wax for the surface.  By the way - no wet-suits either and we surfed year-round.  Living about 6 miles from it was the natural place to surf.  We sometimes went up to Leo Carrillo and and never went south.  Few surfed the and breaks because - well, just because.   Because was close and just about the best break anywhere - and few surfers then.  A crowded day was about a dozen guys out.

Even though I live close to a couple of great breaks I do not surf anymore.  I do get into the ocean regularly, body-boarding, but surfing has lost it's appeal.  Main reason?  The same as many.  Too many people.  But just north of us is a nice shore break.  A few boards come out but not enough to interfere with the body-boarders.   It is more about just being in the water and not on top of it.  I feel more part of the environment.  And most of the year without a wet suit.  When the water drops below 60 degrees then that is about the time the wet suit comes out.  But that is what so great about living in sunny - living outdoors and you can be in the water all year long without wearing a big rubber .... suit.