Labels
Posted by Unknown 2:00 AM

Now I am really going to date myself (as if the photograph of me with the painting does not already do that) by writing about my first experience with skateboarding.   I lived on a hill in a neighborhood of hills and for fun we made coaster wagons or cars and coasted down the hills.  Some of us would 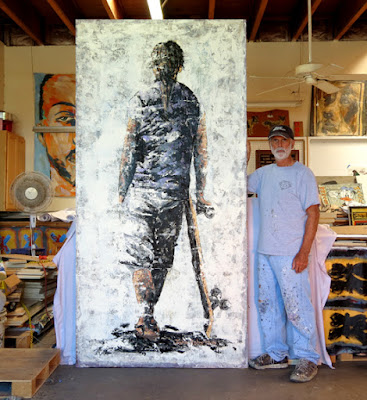 make the steering out of ropes, then extend the ropes and stand in the cars while we coasted.  Lots of crashes into curbs and cars.  But one kid had a sister who would roller skate down the hills.  We didn't want to be on roller skates (that was a girl thing) so somebody had seen somewhere, where someone hammered roller skate wheels on a two by four and rode it.  So that is exactly what we did - we nailed metal roller skate wheels to two by fours and started riding them down thehills.

What's the problem?  Well, the first problem was that, idiotically, we were trying to ride a two by four.  We were too stupid to put the wheels on a wider piece of wood.  You have to also remember, there were no trucks for the wheels so the board was difficult to turn.  It was a straight shot down the hills and speed became a factor - too much of it.   Things got in the way.  Manhole covers, dogs, cars parked, moving cars, other kids, etc. (I had a friend that fell in front of a car and got run over - not literally- as they only ran over his arm.  He just stood up and shook it off - not his arm, but the pain).  And after not too many trips down the hills the metal wheels flattened out.  We were going at a speed that warmed up the metal and the rough asphalt streets squared out the wheels - bumpy rides and sudden stops.

Slowly technology caught up to us with the invention of clay wheels.  This was a big improvement. But we were still coasting the hills and if you hit rocks or the manhole covers the clay wheels shattered which led to more scrapes and bruises.

Then came the newest in the evolution of wheels, Polyurethane wheels which were much more tough and resilient, with good traction and better shock absorption than the older metal or ceramic wheels.   There were other things that moved the whole skateboard thing forward; skateboard trucks, loose 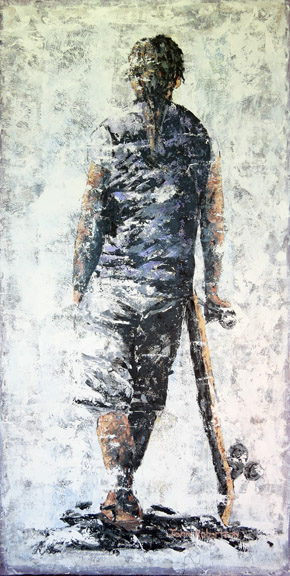 By the time all the changes came in I felt I was too old toskateboard, although I would skateboard in front of the house sometimes.  One of my memories towards the end was when I had been married for a few years and had a couple of small girls.  Some of the boys in the neighborhood knew that I skateboarded and had seen me out front.  A couple of them knocked at the door and my wife opened it up.  One boy said,  "Can Mr. Robertson come out to play?"