The offensive linemen plays one of three positions, center, guard or tackle, and usually the biggest players on the team.  I can't think of anything more intimidating in football, or in  most sports, than to have an offensive lineman out in front of a running back.  His job is to make space for the runner. 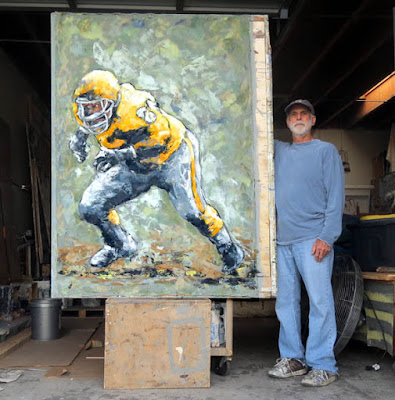 Visualize a wedge, snow plow train barreling down deep, snow covered railroad tracks.  And with speed and power this huge wedge plow on the front of the iron, diesel engine throws the snow hundreds of feet off the tracks.

Most offensive linemen are just anonymous monsters, part of this wall of other brutes.  But there are some that have stood out in the NFL.  Some had great nicknames like, " Smash-Mouth" or "Night-Train" or "The Jordon Spreader".

Another great Raider offensive linemen was Art Shell.  At his playing size of 6’5″ and 265 pounds, Shell would  drop his hips and use pounding leverage to clear space for running backs or put up a shield and protect his quarterbacks.

One of my favorites is Forrest Gregg of the old Vince Lombardi, Green Bay Packers.  Lombardi said Gregg was greatest player that he ever coached. As a Packer, Gregg brought back five championships to the “Frozen Tundra.” In the twilight of his career, he won Super Bowl VI with the Dallas Cowboys.  Gregg played in a then-record 188 straight games between 1956 and 1971. Gregg made nine trips to the Pro Bowl and seven appearances on the First­-Team All­-Pro list.

And who some considered the best offensive lineman of all time is Anthony Muñoz - left tackle, Cincinnati Bengals.  He was the "real deal"  with size, strength, athleticism, and technique.  He played at six feet six inches and weighted two-hundred and seventy-eight pounds. He could create an alleyway that a truck could drive through - or "wall off " a blitzing linebacker.  Munoz played in nine Pro Bowls between 1976 and 1985 and named lead guard on the NFL’s 75th Anniversary All­-Time Team.