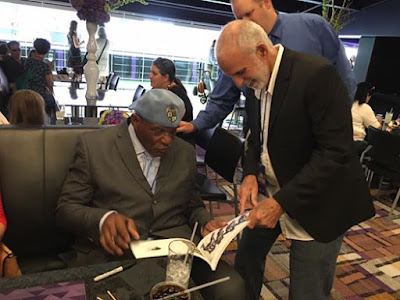 The photograph is of me, sports artist John Robertson with Carl Eller, autographing a page from a book that has one of my paintings of the famous "Purple People Eaters" .  They were the great front four linemen for the Vikings. "The Purple People Eaters" included; Carl Eller, Allen Page, Gary Larson and Jim Marshall.  The painting commission hangs in the new Minnesota Vikings US Bank stadium in Minnesota

It was really exciting for me to meet Carl Eller as I was, and still am a big fan of the Vikings.  My wife is from and I have been going back with her at least once or twice a year since we have been together.  Eller is only a year older than me so we are contemporaries.  He is a big, big man standing six foot six and thick as a big tree.  What is interesting about him is that he makes ceramic art.  His bowls are beautiful and he created some pieces for the US Bank,   Vikings art collection.  Here is a link to his facebook page that shows some of his work.  https://www.facebook.com/Carl-Eller-Studios-140010289424137/ 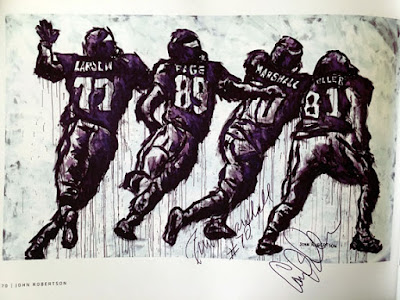 Carl Eller was one of the defensive ends who played with the Minnesota Vikings from 1968 through 1979.  Starting in 1968, Eller's fifth campaign, won 10 Central Division titles in the next 11 seasons. The Vikings won the 1969 NFL championship and NFC crowns in 1973, 1974, and 1976 and Eller was one of 11 Vikings to play in all four of their Super Bowls, all losses.

He was selected to play in six Pro Bowls (1968–1971, 1973, and 1974). After being traded with an eighth round pick to Seattle Seahawks for defensive tackle Steve Niehaus, Eller played his final season in 1979 with the Seattle Seahawks, where he ran his career total to 225 games. In his career, "Moose" only missed three games and started 209 out of the 225 he played.

The painting you see in the photograph is eight feet by twelve feet, acrylic on canvas.  The "Purple People Eaters' painting is in the Gold Suites lobby to Norsemen's suites in the US Bank stadium where the Minnesota Vikings play. This is a private area for the suite owners but the doors are sometimes left opened so one can see them from the public area.
Labels: Carl Eller carl eller autograph defensive end Minnesota Vikings NFL NFL art NFL image Sports Artist John Robertson US Bank Stadium