Labels
Posted by What Art Did He Make Today 2:00 AM

Although Dan Marino was one of the greatest quarterbacks in the NFL he never one a championship.  (But in 1984 he did lead the Miami Dolphins to the Super Bowl, where the club lost to the San Francisco 49ers led Joe Montana win of  38-16).  For example Marino was first rookie to start at quarterback in 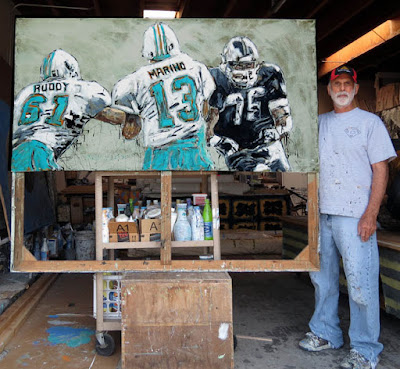 the Pro Bowl. That rookie year Marino threw for 20 touchdowns, led the Dolphins to a 12-4 record, and became the NFL's Rookie of the Year.  That's not a bad start for a quarterback who had five other quarterbacks in that year's draft taken before he was drafted.

At the time one of the greatest years any quarterback has had in the NFL was by Dan Marino.  In that 1984 Super Bowl season he threw for 5,084 yards and 48 touchdowns, both single season records at the time, while also setting new NFL marks for completions with 362.  A quote from Dan Marino and his career says it best, " I just try to be myself, whatever that is. I don't think about how I'll be remembered. I just want to be consistent over a long period of time. That's what the great players do."

It is always interesting to hear what a quarterback has to say about his coach and how he may feel, as a quarterback, about his leadership role.  Marino said this about one of his games.  "We're not running the ball again until we get ahead. Shula was calling the plays, but I told them, 'I don't care what he calls. We're throwing every pass from now until we get the lead.' To Shula's credit, he always gave 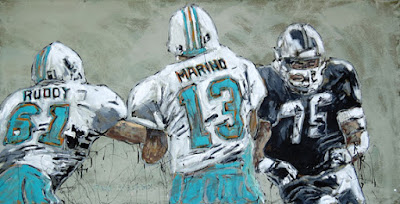 The other image in the painting is of Hall of Fame defensive end Howie Long who played in the Super Bowl XVIII with the Los Angeles Raiders in 1984. He was an 8-time Pro Bowler and one-time Defensive Player of the Year in his career.  He recorded 91.5 career sacks and became an NFL sportscaster after retirement.