Labels
Posted by Unknown 9:27 AM

Ryne Sandberg nicknamed "Ryno" played in Major League Baseball as a second baseman for the Philadelphia Phillies and Chicago Cubs. 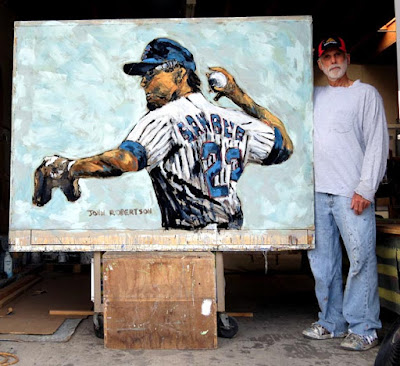 I painted this sports art for my niece as a wedding present.  My sister lived in for a number of years and, as I remember, she went to graduate school there also.  She is a big fan of the Chicago Cubs and when her first daughter was born she named her Ryne after Ryne Sandberg.  Although they eventually moved away from the area they continued to be fans of .  Knowing that I am a sports artist, my niece asked for a Chicago Cubs painting.  So I have surprised her with this baseball painting.

Sandberg was a perennial All-Star and Gold Glove candidate, making 10 consecutive All-Star appearances and winning nine consecutive Gold Gloves from 1983 to 1991. His career .989 fielding percentage is a major-league record at second base. Sandberg was elected to the National Baseball Hall of Fame in January 2005; he was formally inducted in ceremonies on July 31, 2005.

One of my favorite quotes from Ryne Sandberg is because it has more meaning in to life and not just baseball.  He said, "In baseball, there's always the next day."  There  is always the next day to move on with your life.  Don't let the past haunt and weigh you down.  I like that thought.