Labels
Posted by What Art Did He Make Today 2:15 PM 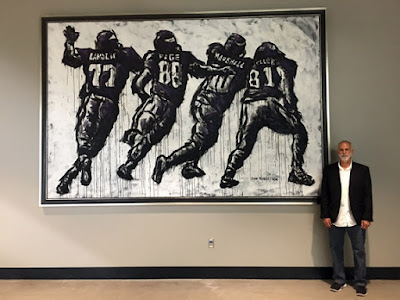 is in the Gold Suites lobby to Norsemen's suites.  This is a private area for the suite owners but the doors are sometimes left opened so one can see them from the public area.

What was fun about the opening is meeting Carl Eller and Jim Marshall who autographed the photograph art book featuring the stadium's artists.  We also had a chance to meet the great Minnesota Vikings coach Bud Grant.

We went to the art collection opening at the new  U.S. Bank Stadium where the NFL Minnesota Vikings will be playing their football games starting this 2016 2017 football season.  The stadium has a museum-quality art collection.  Both my wife and I have pieces of art in this collection.

U.S. Bank Stadium has some unique features in comparison to other NFL stadiums, It has the largest transparent roof in the nation and five 95-feet high pivoting glass doors that will open to a nearly three-acre plaza and the downtown skyline. While the stadium’s roof will be fixed, the transparent 200,000 square feet of glass throughout the building will give fans an outdoor feel in a climate-controlled environment. The stadium seats are just 41 feet from the sideline. Seven levels in the stadium and it has two of the largest and highest-quality HD video boards in the NFL that are located in both the east and west end zones.

About the US Bank Vikings Stadium Art Collection

To see a short video of some of the collection you can go to : http://www.usbankstadium.com/about-the-stadium/art-collection/  You will see two of my paintings in the video.  What is an interesting side comment is that my name is not listed on the collection artist's list although my paintings are in the stadium.


One of my large scale football paintings on the jumbotron at the new Minnesota Vikings' US Bank Stadium where several pieces of my work are installed
stadium.  My understanding is that only a couple of artists that were not from were included in the collection - me being one of them.  This was intentional as the other artists not from were also left off the list.  My wife, Lynn Hanson was included (see photograph above with our paintings shown together in the Gold Lobby to the Norsemen suites) as she is from and her sister lives about an hour from downtown .
Labels: Allen Page Artist John Robertson artist Lynn Hanson Carl Eller Gary Larson Jim Marshall Minnesota Viking NFL Purple People Eaters Sports Art sports paintings US Bank Stadium Viking ship Vikings