Labels
Posted by What Art Did He Make Today 10:28 AM 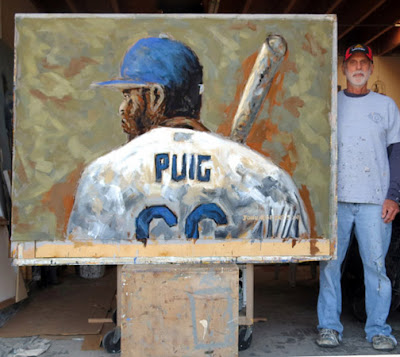 Yasiel Puig - mega-talented right fielder of the Los Angeles Dodgers - and as of this writing and finishing of this painting may be destined to leave the Dodgers in s trade.   Here are a couple of links to other sites that write about the rumors more clearly than I ever could - as I am a sports artist and
not a writer.  I only try to provide a little background to the paintings I paint.  So if you are interested in what may happen or want to see what people were guessing before whatever happen, did happen, then check out these two links:

Yasiel Puig Journey to US

As most of you who are reading this know that Yasiel Puig left the of and was smuggled into the with the help of people with special interests in and .  Even with outside help, by anyone's imagination, it must have been a risky journey that few would be willing to take.  People make the trip for a variety of reasons - but most do so for economic or political motives.  And, apparently there is a lot of crazy stories surrounding Yasiel Puig's migration to the .   If you are at all interested in what Yasiel Puig faced in his travels to the , you might wish to read the article attached to the following link.  http://espn.go.com/espn/feature/story/_/id/10781144/no-one-walks-island-los-angeles-dodgers-yasiel-puig-journey-cuba

He grew up in , and played for the Cuban national team in the 2008 World Junior Championship, where they won a bronze medal. He then played in the Cuban National Series, but a failed attempt at defecting to the had him out for a season as punishment. He then tried several more times to defect to (so as to get to the by land), finally succeeding in 2012. Puig signed with the Dodgers in 2012.