Although I had followed boxing when I was a kid, I did not become conscious of Muhammad Ali until I was in the Navy.  Before then, growing up I watched the Wednesday,  Friday and Saturday night fights on a black and white television with my step-dad.  At that time my favorite fighter was 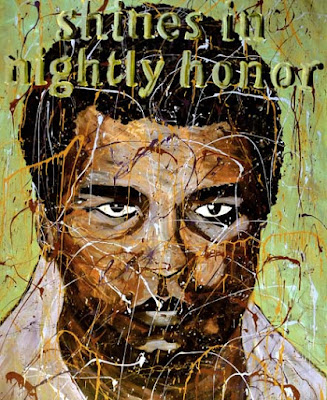 Archie Moore who fought as a light-heavyweight and had one of the longest professional careers in the history of the sport.   I also liked his nickname, "The Mongoose"

I joined the Navy in 1961 and didn't pay much attention to boxing.  But in November of 1962 Muhammad Ali fought Archie Moore.  At the time I was on an aircraft carrier in the middle of the Pacific and as entertainment the ship broadcasted the fight over the ship's radio system.  Hundreds of sailors gathered in different recreation rooms around the ship and listened the fight.  Of course, I was for "The Mongoose" and was sorely disappointed when he lost.  But that is when I became aware of Ali.  After that the ship continued to broadcast the fights.   By the time Ali fought Henry Cooper in 1963, I was a die-hard fan.  And that continued all through his career.

Individual fans have their favorite quotes of Ali.  My favorite is, ""The fight is won or lost far away from the witnesses, behind the lines, in the gym and out there on the road, long before I dance under those lights."  Why this quote so inspirational to me is that, as an artist (painter) their are years of time spent at a canvas trying to paint a good painting.  I've painted hundreds of  large-scale portraits.  The first fifty portraits were terrible and I would not show them to anyone.  But I knew I had to put in the time and the hard work would pay off.  And soon I could paint a descent portrait - now, I get three good ones for every ten I paint.  I understand what it takes for an artist to have created a body of work for an art or museum show.

Another quote that is just as inspirational to me is: "Impossible is just a word thrown around by small men who find it easier to live in the world they've been given than to explore the power they have to change it. Impossible is not a fact. It's an opinion. Impossible is potential. Impossible is temporary. Impossible is nothing."  My experience with this quote is certainly not one of overcoming a huge impossibility - but - I didn't start painting until I was forty-seven years old.  And before that had shown no interest in art, museums or galleries.  But someone suggested I paint to help relax me.  I was a businessman and had been an English major in college. Pretty far away from art.  But I fell in love with painting. and by the time I was in my fifties I started selling paintings and now am a professional artist.  Anybody who knew me before I was an artist would say "impossible"