Labels
Posted by What Art Did He Make Today 9:04 AM

Under the new baseball slide rule into second, "both baseball players have to wear a dress."  At least, that is what one of the Major League baseball managers was quoted as saying.  His point being that the MLB was taking all of the "sport" out baseball.   If the baseball player can't go into second base 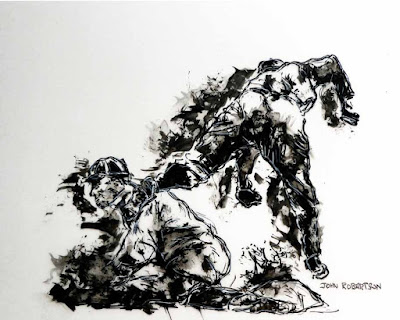 with "spikes up and wide" in an attempt to break up the double play, then where is the excitement and risk of the game?  One of the new rules state: "A runner sliding into second has to make "a bona fide attempt" not just to slide into the base, but also to "remain on the base."   In other words,  "no interference".  In the case of this baseball painting the base runner is trying to interfere with the shortstop.

It seems to me, part of the reason to slide into second base, during the possibility of a double play, is to interfere with the play.   Another way to break up the double play is to run the base path so the baseman can't throw straight to first base.  So, instead of taking the danger of the play out with the baseball slide rule they should put a rule in to make it a greater risk for the base runner to run the bases.  And that would be that the base runner has to run the bases in a straight line between the bases.  But, with the new rule, the  baseman may throw the ball at the base runner, but the base runner is not allowed to duck.  That kind of evens out the whole "fairness" of a need for a slide rule.  Let's make sure both basemen and base runners are, "at risk"  and keep the game as entertaining as ever.  Maybe, even more entertaining.

If the League thinks it is protecting baseball players, it is eliminating not the most dangerous aspects of the game.  The most dangerous?  - getting hit by a pitch.  The next change is coming:  protect the batter by putting him into a batting cage.