This painting of Joe Mauer first baseman and used to be catcher of the Minnesota Twins major league baseball team is approximately 8” x 10” on a 11” x 14” piece of drafting film. Ink and watercolor. 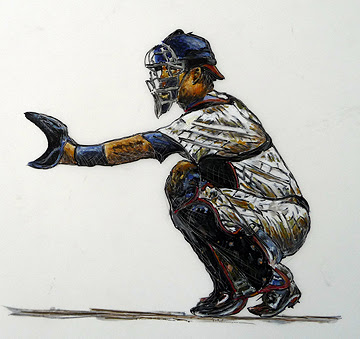 Joe Mauer's main position when he started playing was catcher and sometimes first baseman.  When asked to paint him for a relative he wanted a painting of Joe as a catcher.  As a catcher Joe took a few hits to the head causing some concussions.  On November 11, 2014 the Twins announced that Mauer would permanently move to first base in order to protect their star player from further concussions and the day-to-day physical wear of being a major league catcher.  Since then, like in the past he has performed nicely.

This painting was created for a  gift to my nephew-in-law.  He is my wife's sister's son who absolutely loves the Minnesota Twins and goes to as many games as he possibly can.   My wife's family is from and her sister lives just about a hour north from the Twin Cities.  When my nephew left to take a teaching job in he wanted something that would remind him of his home state.  His mother suggested a baseball player and we somehow found out his favorite player was Joe Mauer.

I did paint Joe as a surprise and it eventually the painting ended up in .  My nephew comes back to the states for all vacations and, of course back to .  And one of the first things he does is go to a Twins game.  We get to see him every summer and a few times he has come to to visit.   Also, he is moving on from after three years there he is not sure where his next job will be.  But he does like teaching in a foreign country except for missing the Twins

What is going to be fun this upcoming summer 2016 is the opening of the new Minnesota Vikings stadium.  Both my wife and I have painted large-scale sports artwork for the new stadium and will be able to take her nephew to the opening in July.  He is excited about the whole process as football and the Vikings is his next big passion.  Don't tell him but I will probably get some prints of the images I painted for the Vikings and they will be a great gift for his return.
Labels: Baseball catcher Baseball Catcher painting baseball image Catcher image Joe Mauer Minnesota Twins MLB MLB pictures Sports Art sports image