Labels
Posted by What Art Did He Make Today 11:49 AM 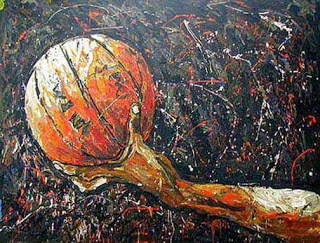 I have been asked a number of times how I became a sports artist - which started with basketball layup paintings.  Most people assume that I was an avid sports fan and painted what was of most interest to me.  Actually, it was strictly by accident I became a sports artist.A painting of a left hand holding a basketball layup getting ready to dunk the ball through a hoop

A number of years ago I was painting large-scale portraits of the musicians in a night club in , Ca. named The Temple Bar.  The completed portrait paintings hung in the windows that faced , a well traveled street.  I frequented the club, one or two nights a week for about five years.

One afternoon I got a call in my studio from a person claiming to be a director for Fox Sports Net and he had seen my paintings in the window of the Temple Bar.  He said they had been looking for an artist for a NBA basketball commercial and wondered if I was capable of doing some large-scale . 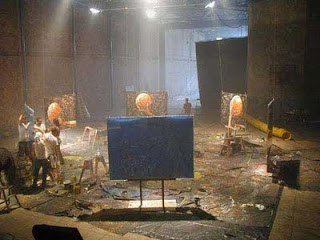 sports paintings.  It seemed like a foolish question as he had already seen my work in the windows - and I thought it was just a friend messing around with me.  Yeah.  Right.  Fox Sports is calling me to paint some paintings for a NBA commercial.  He convinced me he was for real and invited me down to their studios in

As you can see by the photograph the paintings were put in a circle and the camera spun around to animate the look of the basketball layup being made.   They also showed an artist painting the basketball paintings in a very expressive, impressionistic way.  I was not in the commercial as they hired a young kid to play my roll as the artist.  The director said, as an older person, I was not the demographic they wanted as the artist. 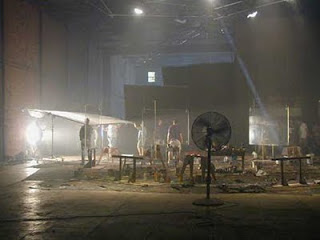 Fox Sports then hired me to paint portraits of Willie Mays for an MLB All-Star game in which  Ken
Griffey Jr. and Derek Jeter interviewed Willie for 4 1/2 minutes. Again, my sports paintings were featured in the interview.

I was now identified as a sports artist.  An artist sports agent contacted me and started representing me for big commercial jobs - stadiums and arenas, restaurants, corporate offices, etc.  And I have been doing that ever since.  The bottom line of it all is that I was very lucky to have been "discovered" by someone at Fox Sports and then by the agent who promoted me.
Labels: basketball Basketball Art basketball imag basketball lay up John Robertson basketball Layup Basketball Painting basketball painting fox sports fox sports lay-up