Labels
Posted by What Art Did He Make Today 9:49 AM 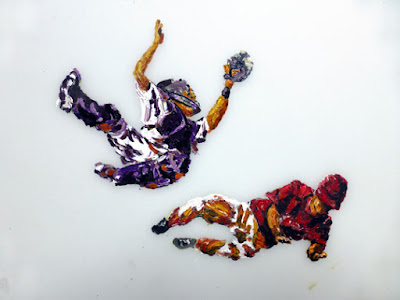 It was once said about baseball catchers that they are like a backstop with a good arm.   But it is not always recognized early on in a player's career.  A good example of that is Johnny Bench.  Johnny Bench was one of the great catchers of all time but it is interesting to note that he did not start out in that position.  Here's what he said about playing baseball as a youth.
"I played American Legion ball starting when I was 14. But I didn't catch until I was 17. I was 75-3 as a high school pitcher, but it was like everybody knew that I was supposed to be a catcher. When the scouts would come around, and I was pitching, they'd make me take infield practice so the scouts could watch me throw."

Catchers are the defensive leader on the field. They position players on the field, call the pitches and can and have a pragmatic view of baseball. One of the best pitcher ever, Bob Feller said, "If you believe your catcher is intelligent and you know that he has considerable experience, it is a good thing to leave the game almost entirely in his hands." A good catcher will have psychological insight and have a list of behaviors for each player approaching the batting box. His eyes are continuing to move across the field of play and his mind running the different offensive scenarios in his head. All of this going on with a baseball bat menacingly inches from his head.