Labels
Posted by What Art Did He Make Today 8:29 PM 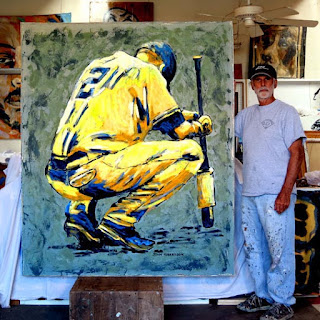 Some of what Derek Jeter says can be directly applied to being an artist.  .  For example Jeter said, " There may be people who have more talent than you, but there's no excuse for anyone to work harder than you do - and I believe that."
I am a perfect example of that thought.  Although there are a lot of great artists out there - a lot of them do not make a living as a painter.  I am fortunate - and lucky - and I work very hard at what I do.  I am in my studio every day painting or finding a way to sell a painting.

Of course, the problem with that work ethic is that I tend to forget to feed the cat, or water the flowers, or make the bed in the morning.  Now, that was okay when I wasn't married.  I mean, who cares?  Nobody was coming into my studio to check and see if the bed was made.  And the cat could find it's own food - and the flowers?  What flowers?  They were dead long ago.  But now that I am married things have changed.  I will make the bed and sometimes even change the sheets.  As Derek Jeter says, " I have feelings. I'm not emotionally stunted."  But as my wife says,  "Who would know?  You're in the studio all day painting and thinking about yourself."

A little About Derek Jeter

Derek says it again. " I don't really see myself getting a Twitter account..."  You want me out there emoting?  When Derek Jeter was playing do you think he had time for expressing his feelings?  No.  He was busy.  Hw was born on June 26, 1974, in and grew up playing baseball.  He enrolled at the , but his time on campus was brief as he rapidly ascended the ranks of the Yankees' farm system. After batting .344 with 50 stolen bases in 1994, he was selected as "Minor League Player of the Year" by several publications, including The Sporting News and Baseball .

He was drafted by the Yankees in 1992. During 1996, his first full season in the majors, his performance helped the Yankees win the World Series against the Braves. Since then, he's seen four more Yankees World Series wins in 1998, 1999, 2000 and 2009. Jeter is the all-time Yankees hit leader and was named team captain in 2003. When he officially retired in 2014, he ranked sixth in MLB history with 3,465 hits."  Thank you for the information from http://www.biography.com/people/derek-jeter-189311

And when it was all over Jeter could start living a normal life, one away from the "bright lights, city lights"   He told NBC that starting a family and raising kids was one of his reasons for retiring from baseball. "I want to have a family," Jeter said. "Who knows when it's gonna' be? But I look forward to it."
Labels: Baseball Baseball Art Baseball paintings Derek Jeter MLB New York Yankees Shortstop Sports Art sports paintings