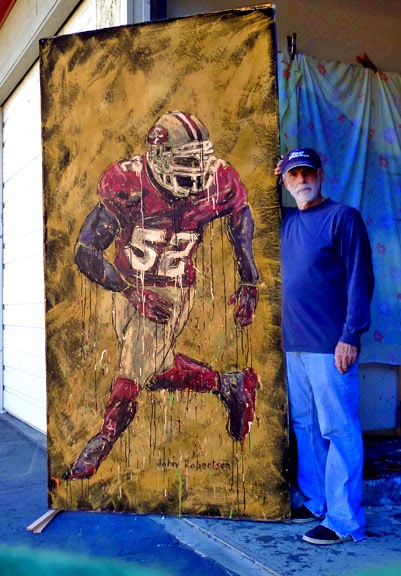 This is my painting of linebacker Patrick Willis who has retired from the 49ers.  Some of you who follow my blog know that I created five large-scale pieces of art for the San Francisco Forty Niners, Levi Stadium. You can see some of the pieces on this blog,

Patrick Willis came into the NFL in 2007 and was defensive player of the year.  A great start.  But not the best way to go out - as he had a toe injury in the 2014 season and surgery that left him with feet that were painful and tender.   A seven time Pro-Bowler he never got his Super Bowl ring - a big disappointment to him.

My first painting of Willis was a small piece that I did for my cardiologist after my heart surgery.  I knew he was a 49ers fan so I asked the head nurse in his office to find out who was his favorite player on the 49ers without tipping him off about me painting someting for him.  She said, all the other cardiologists in the office talked football every Monday morning so she would ask them without letting him find out.  Patrick Willis was his favorite.

My next appointment after the surgery I gave him the painting.  He was shocked and excited.  He immediately took a photograph of the painting and started texting it to all his friends.  He even sent it to his mother.  Obviously he liked it.