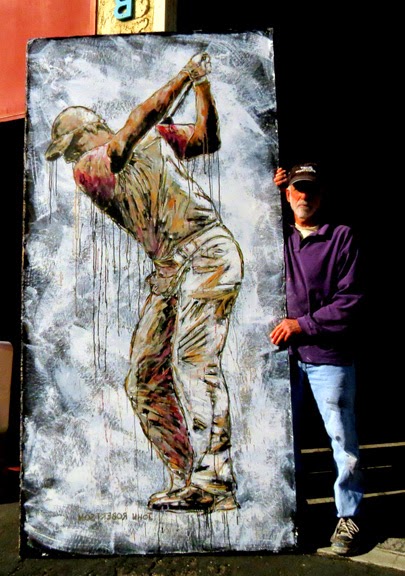 Bubba Watson is currently ranked 3rd in the World Golf Rankings.  The painting is approximately 4 feet by 8 feet, acrylic on unstretched canvas.

My current interest in golf is limited to watching a few holes of golf on TV on a Sunday afternoon.  I shouldn't really say I watch the golf - I use it as a way of relaxing after working hard in the yard.  My wife thinks that I like golf - that I watch it to keep current on a category of sports for my work.  As you probably already know, I'm a sports artist and have been making a living at it for quite a number of years.  It is important to know what is going on with different sports - but golf?  It is hard for me to keep track of the players.  It doesn't help that I usually fall asleep on the couch when I should be paying more attention to the game.

When he was in college and on the USC golf team an opportunity became available for him to do a publicity stunt - of sorts.  I never knew why or for what reason but somehow he got connected with "Riply's Believe it Or Not"  to play the longest golf game.  My understanding is that he went out to the LA Country Club, (a bit prestigious)  and where his dad was a member and played the first hole.  He then was driven to the LA airport (LAX) and flew to to another country club and played the second hole.  From there on he took flights to different parts of the US working his way across the country playing proceeding holes until he had played eighteen and reached New York.
Ripley's Believe it or Not.  Here is a link to Bubba's facebpook page https://www.facebook.com/BubbaWatsonGolf
Labels: Bubba Watson Bubba Watson Painting Golf Art Golf image Golf Painting golf swing Golfer Golfer Art Golfer painting PGA Pga art Sports Art Sports Artist John Robertson sports paintings