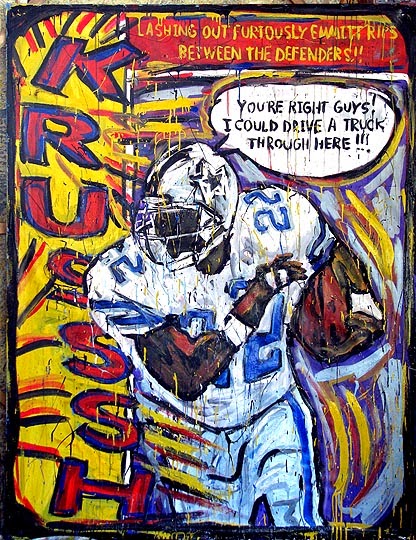 Here is a link to a great bio of Emmitt Smith on his official web site.  This is a short bit about him from the site.  "Smith first rose to prominence via an illustrious football career, which included three Super Bowl championships as a member of the Dallas Cowboys and the honor of being the only player to have won a Super Bowl MVP, NFL MVP and NFL Rushing Crown in the same season. Inducted into the Pro Football Hall of Fame as part of the Class of 2010, Smith is the NFL’s all-time leading rusher, having amassed 18,355 yards during his 15 seasons.

Emmitt Smith was inducted into the  Pro Football Hall of Fame in 2010.  Here is a link to his Hall of Fame speech.  Very inspiring.

To get an idea of what  gracious guy Emmitt Smith is one only needs to read what he had to say when DeMarco Murray became the all-time leading ball carrier for the Dallas Cowboys.   Smith's single season record was 1,773 yards set in 1995. also wrapped up the rushing title as the league's top running back.  "I couldn't be happier for him," Emmitt Smith said. "He is very deserving of this recognition. This is something that I know DeMarco will share with the whole team, because he knows that they all had a hand in his success." .... "I am proud of him because I know how hard it is to do what he did this year," Smith said. "I am also proud because I've watched him bounce back from some injury setbacks in his first few years. He's a worked through all that, and he deserves to have this record. I want him and the whole team to keep up this level of play and carry it into the playoffs."
Labels: Dallas Cowboys Dallas Cowboys art Dallas Cowboys paintin Emmitt Smith Emmitt Smith painting Football Art Football Painting image Football Image sports art Sports Artist John Robertson