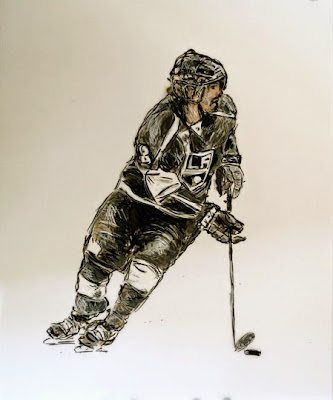 Hockey Painting of LA Kings Defenseman DrewDoughty is 11” x 14” ink on drafting film, I had a great opportunity last season to go to the first game of the Stanley Cup  in .  As my son-in-law says  "Drew Doughty is a superstar defenseman."    He is an integral part of the well-oiled machine that is the LA Kings.  One of the nicest things a teammate can say about another is what teammate Justin Williams says,  "Doughty gets better as the season progresses.  The great thing about him is he doesn't know how great he really is."

Drew tells an interesting story about how he started playing as a defenseman.  "Back when I was a kid in I was a forward all the way until major bantam hockey.  Then one day we were short some defenseman at camp so they asked if I would play back on defense for a couple games.  I had been on the team for a while and I had kind of established myself so I tried it out and it and I played well.  So my coach asked if I minded switching to defense and I was happy to and it worked out."

When anyone asks about his ability to play his supporters tell you all Doughty needs to do is go out and play his game. “Drew is a very simple kid – what you see is what you get,” veteran Sean O’Donnell says. “He doesn’t over think things. Whether he makes a good play or a bad play, he moves on. He’s got a short memory.”

Once again, it all goes back to his mindset. “On the ice I’m not worried about making a mistake,” Doughty says. “I’m never thinking, ‘If I make this play, what can go wrong?’ I’m thinking, ‘When I make this play, it’s going to happen the proper way and I’m going to make it.’ That helps me. I don’t get down on myself. Of course I’m angry for a little bit, but I get over it pretty quickly. I go back out there and I’ll make that same play again.”