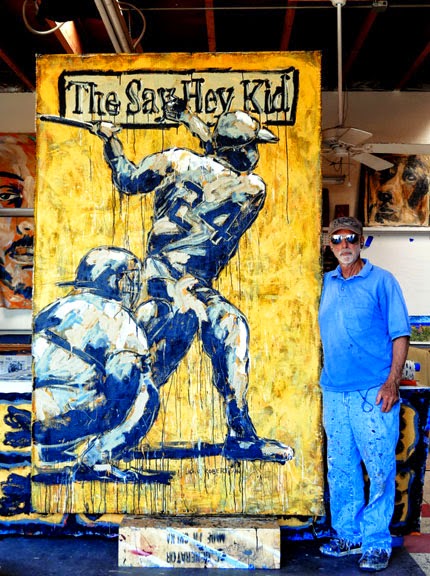 Painting of Willie Mays is 5 feet by 8 feet, acrylic on unstretched canvas.  To see what is available for sale please click on link in the navigation bar at the top of the page.

This is about the sixth time I have painted a large scale painting of the great center fielder, Willie Mays, nicknamed The Say Hey Kid"  who played for the old New York Giants and the San Francisco Giants.  He finished his baseball career with the NY Mets.  The first I painted Willie was for Fox Sports, a number of years ago.  Willie Mays was interviewed by Derek Jeter and  Ken Griffey Jr. during the 2007 Major League Baseball All Star Game for Fox Sports.  If you watch the Willie Mays video on YouTube  or see it below,  you will see three large-scale paintings behind the three great baseball players  in the interview.  The two portraits in the interview are 5 feet by 6 feet and the famous Willie Mays "Catch"  was approximately 3 1/2 feet by 8 feet.   Like the paintings you see above, they were all painted with acrylic and on unstretched canvas.

The famous catch Willie Mays made refers to a great catch he made during game 1 of the 1954 World Series between the New York Giants and the Cleveland Indians at the Polo Grounds in .  It was September 29, 1954.  score was tied 2–2 in the top of the 8th inning. Vic Wertz was at bat.  The count to two balls and one strike,  Wertz hits a ball approximately 420 feet to deep center field. Willie Mays, who was playing in shallow center field, made an on-the-run, over-the-shoulder catch on the warning track to make the out. Having caught the ball, he immediately spun and threw the ball to hold a runner, who was at second, from scoring.  If Willie had not made "The Catch"  the two base runners would have been able to score and the game would have been at 4 to 2 in favor of the Indians.  The play saved the game and the New York Giants went on to win the game and eventually the World Series in four straight games.

Willie said of the catch, "People talk about that catch and, I've said this many times, that I've made better catches than that many times in regular season. But of course in my time, you didn't have a lot of television during the regular season. A lot of people didn't see me do a lot of things."

Some of the more interesting facts about Willie is Mays is that he won two MVP awards and shares the record of most All-Star Games played (24) with Hank Aaron & Stan Musial.   Ted Williams said, "They invented the All-Star Game for Willie Mays." Mays ended his career with 660 home runs, third at the time of his retirement, and currently fourth all-time. He was a center fielder and won a record-tying 12 Gold Gloves starting the year the award was introduced six seasons into his career.  In 1979 Willie Mays was inducted into MLB Hall of Fame on the first vote