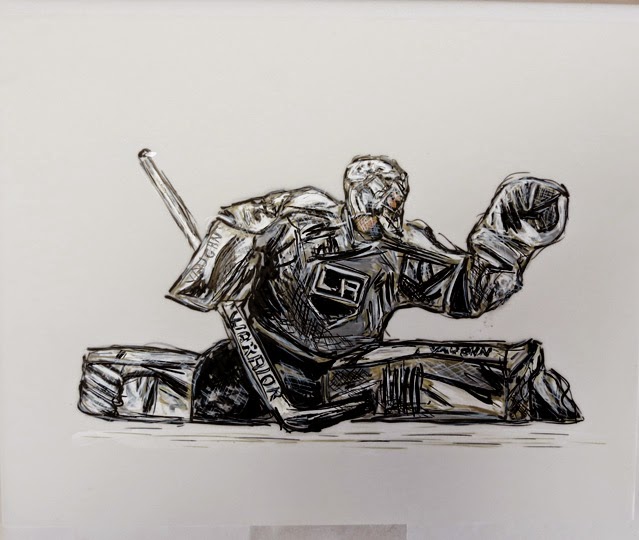 Hockey Painting of Jonathan Quick #32, Goalie for the LA Kings blocking a shot art is 11” x 14” ink on drafting film

Because of the quality of play Jonathan Quick, who is considered one of the best hockey goalies in the NHL, it surprised me to find out that he was picked 72nd overall in the 2005 draft.  72nd?   With the LA Kings he had won two Stanly Cups, 2012 and 2014, and awarded the Conn Smythe Trophy as the Most Valuable player of the 2012 Stanly Cup playoffs.

In an article by Lisa Dillman, Dustin Brown was talking about the line between confidence and arrogance, and described how Jonathan Quick sets the tone for the veteran-heavy Kings by trending toward the first quality.
"It's more of the same with Quickie," Brown said. "It's just the type of confidence he exudes, really. It's a trickle-down effect. When you have a goalie who is not arrogant but very confident, it goes a long way in the demeanor of the whole team.
"Quickie's quiet. He'll make a glove save and he won't do the big 'I-saved the puck' [flourish]. I guess that's the only way I can explain it. He'll make a save that he has no business making and he'll act like it's a routine save."
Including what was considered by many to be the save of the season, on Blake Wheeler of the Winnipeg Jets at on March 29. Quick was down, on his belly, and raised his leg to make an incredible kick save.
"The Scorpion Kick or whatever they call it," Brown said. "It's like that. Saves like that he shouldn't make. He doesn't make a big deal about it. But if you're looking from the other team, you're like: 'Did he really just make that?

My son-in-law, who first got me interested in hockey and especially the LA Kings, plays in a hockey league.  His team is named the "Ice Holes" and he is the most penalized player on the team.  I will write about that some other time.  The interesting part is their goalie - who is a woman.  I did not realize this until after watching a number of his games.  With her pads, gloves, chest/arm protectors, pants, etc., she stands well over six feet with her skates on.   One would never know she was hidden under all that gear.  I have seen her do an incredible butterfly save and pop back up in a second. In front of the goal she can move side to side like the fabled cat.  To grab a puck on the ice I have seen her crawl on her belly like a reptile.  As the saying goes, she "controls the space."   A puck coming in at 8o+ miles per hour as a good hard (amateur) slap shot to the body is not always  painless.  Getting knocked down is close combat can lead to other pain.  Yet she takes the pain better than a man.  No whining.  She has been through childbirth.  Try that for pain Mr. Hockey Player.   So when it is time for teams in my son-in-law's league to choose players they - "pick the girl"
Labels: Goalie Goalie paintings hockey art Hockey paintings Jonathan Quick Jonathan Quick paintings Jonathan Quick photo LA kings Art LA Kings paintings Sports Art sports paintings